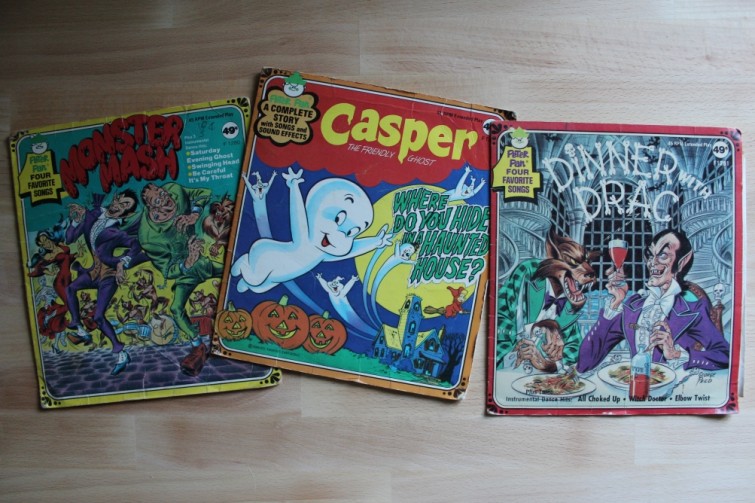 Between the Grooves: Halloween sing-along and story book 45 records

With this post, I wanted to feature three more 45 records that have a Halloween theme. These records were big collectibles in the 80s. But due to mass production, few are particularly valuable. Each of these records were made in the U.S. and were sold for 49 cents.

Monster Mash is a 1962 novelty song and the best-known song by Bobby “Boris” Pickett. The song was released as a single on Gary S. Paxton’s Garpax Records label in August 1962 along with a full-length LP calledThe Original Monster Mash, which contained several other monster-themed tunes. The “Monster Mash” single was #1 on the Hot 100 chart on October 20–27 of that year, just before Halloween. It has been a perennial holiday favorite ever since.

Casper the Friendly Ghost is the protagonist of the Famous Studios theatrical animated cartoon series of the same name. Casper was created in the late 1930s by Seymour Reit and Joe Oriolo, the former devising the idea for the character and the latter providing illustrations. Intended initially as the basis for a 1939 children’s storybook, there was at first little interest in their idea. When Reit was away on military service during the Second World War before the book was released, Oriolo sold the rights to the book to Paramount Pictures’ Famous Studios animation division.

This record has a copyright stamp from Harvey Famous Cartoons. It features a complete story with songs and sound effects.