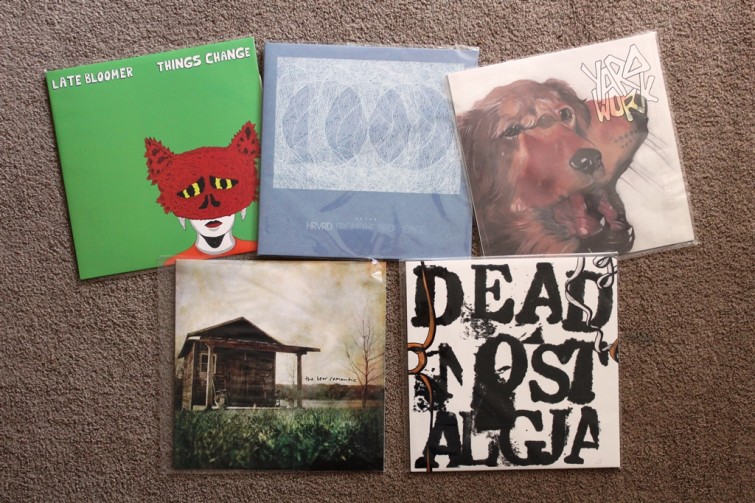 BETWEEN THE GROOVES: Independent music from the Queen City

Usually, I use this Between the Grooves series to focus on one single piece in my record collection to discuss the historical, cultural and personal significance of music that’s important to me. But this time, I wanted to talk about five albums from my neck of the woods– Charlotte, N.C.

Charlotte has a music scene that’s kind of hard to analyze. The presence of undeniably talented musicians is undeniably present, as are several intimate music venues and a popular local record store called “Lunchbox Records.” But the support for these musicians (in the form of concert-goers and local publications) doesn’t really give Charlotte bands the platform they deserve. I could imagine it being difficult to grow as a band with Charlotte as a launch pad.

Nevertheless, I wanted to highlight five records in my vinyl collection that I think anyone in North Carolina should own. I bought each of these albums from Lunchbox Records, although they can be purchased online through the bands’ record labels. These are not necessarily my picks for the top five albums to come out of Charlotte in recent years but simply five records that I’ve picked up recently and wanted to feature.

HRVRD– “From the Bird’s Cage”

The four-piece experimental rock group was the first local band that I saw perform live in Charlotte. And I can honestly say that that night in 2010 sparked my interest in the city’s music scene. Lead singer Jesse Clasen has one of the most unique, disturbingly beautiful stage presence of any band I’ve ever seen.

The band’s sophomore album only reaffirms HRVRD’s undeniable musical capabilities. “From the Bird’s Cage” is less forceful than their debut album “Inevitable and I,” which was louder and harder. This album is more polished, more atmospheric and inspired.

The band is frequently compared to Circa Survive. But having seen both bands perform live more than once, I would argue that HRVRD showcases a more unique and more dynamic sound. Witnessing the band perform live or even listening to their music at home will put your into a trance. It’s something that you need to experience to understand.

See the video at the end of this article for a short sample.

The three-piece punk outfit features ex/current members of Pullman Strike, Meth Mtn, Obstruction, Nations, Horse Thief, Scout and Planet Piss. Their debut album was released in 2013, which provided a modest sample of the greatness to come. Late Bloomers has the potential to be one of the best bands to come out of Charlotte in recent years, and they have a indescribable way of making their creations in concert seem effortless.

The theme of the “Things Change” is in the title. The motifs in the album are comparable to Arcade Fire’s “The Suburbs,” with less thoughtful contemplation and more angst. In the album’s third track, “Children,” the band sings “We were young then, now we count the wrinkles on our face/ it was so easy now we want it all erased.”

“Things Change” showcased stripped-down, energetic rock sounds that might remind many listeners of Yuck’s self-titled album. It’s the good kind of lo-fi. Lyrically and rythmically, “Things Change” is pleasantly nostalgic and familiar. And I can’t wait to hear what the band makes next.

This post-punk group makes music that’s so moshable that I’ve almost gotten into car accidents from when they came up on my iPod– more than once. I wish I was joking. Their first two albums, “I Had Plans for Us” and “I Just Want to Make a Statement” are two of my favorite albums and rarer examples of how a studio album can capture the raw energy of a live concert.

“Dead Nostalgia” has just as much vocal thrashing and rampant guitar riffs that make the band so satisfying to listen to. But you get the general sense that the band takes their music a lot more seriously with their third effort. The riffs are more sophisticated and so are the lyrics.

Still, I highly recommend going back and listening to their first two albums before picking up their newest release. “Dead Nostalgia” is a welcomed step forward for an already awesome band.

Headed by the same lead singer as HRVRD, The Bear Romantic is a more experimental and acoustic project. Closely following the release of “Firewood” in 2011, Clasen began gathering musicians from different local bands, adding layers to what was then a linear acoustic album.

The album’s framework sounds more akin to Bon Iver’s “For Emma, Forever Ago” than any work he’s done previously. Much of the album was recorded in a tiny room that adds a powerful sense of anxiousness to the album. Its surrealism and raw vocals make “Firewood” a mesmerizing gem.

Each song on the album tells a haunting story. Some songs– especially “Farmers” and “The Shed,” tell a story that sounds more like a campfire ghost story than a rock song. I interviewed Clasen about “Firewood” in 2011. Check out that interview right here to read more about the album’s narratives.

Charlotte indie rock group Yardwork released their debut album “Brotherer” in 2011 on Record Store Day through the Lunchbox Records label. Composed of six musicians who cycle through different instruments and vocals, Yardwork creates clunky layers featuring multiple guitars and a few brass additions. Strangely, it works. Anyone who has seen this seemingly over-crowded group perform live knows how much energy they bring to the stage.

I paid $9 for the album, which makes it one of the best values for a record that I’ve purchased in recent history. There are nine tracks on the album, and the cover art is fantastic.

Because more than one vocalist typically sings every Yardwork song at a time, Brotherer makes listeners feel like they are at a live concert even listening to the song at home. The linear motif found in Brotherer also makes Yardwork one of the least pretentious indie groups out there.

Lyrics like “you shed the light and taught me how to grow in a way I never knew/ healing can be a hard thing to explain, but I found that health in you,” from “Posi-Condor Session” displays some of these underlying themes that show up throughout the album. The nonsensical lyrics and odd rhythms of “Son Of Pomegranate” are almost impossible to not sing and dance along to live.