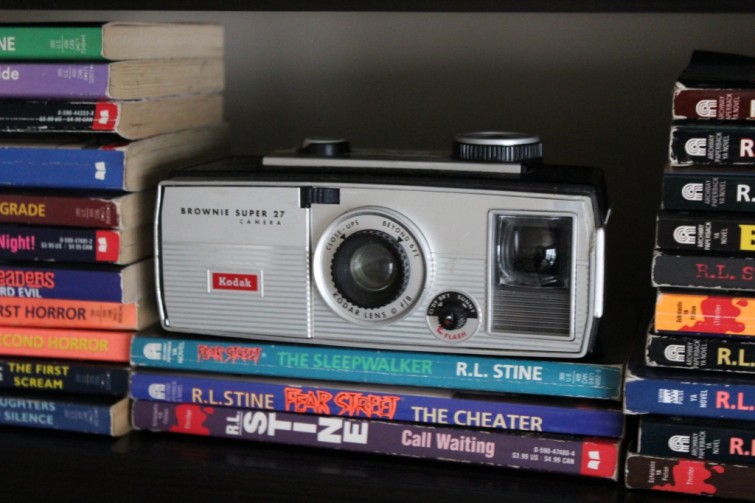 The Brownie series of Kodak cameras has a long, significant history on the world of digital gadgets. Kodak recently celebrated the 100th anniversary of the Brownie camera, which revolutionized the way we communicate through photograph– a camera that cost just one dollar when it was first introduced.

The Brownie Super 27 was one of the more compact gadgets in the series. It is a viewfinder camera that took 4x4cm images on 127 film. It was made in the USA by Kodak, from August 1961 to June 1965. It has a built-in flash holder for AG-1 flashbulbs, covered by a door beside the lens.

The shutter has two speeds, 1/80 when the flash door is closed, and 1/40 when open. Winding the film cocks the shutter, hence preventing double-exposures.

I was especially excited to find this model for a dollar at a local thrift store. The simple flat design and matte metal encasing with that classic Kodak logo in red looks great on a bookshelf. The few twisting knobs, tiny eye piece and deep cultural significance make for a great minimalist conversation piece.

For a lot of collectors of vintage gadgets, there are a lot of sought after iterations in the Brownie series. And a very select few are known to fetch a few hundred dollars.

GAME/SHOW: Is The Sims the Ultimate Reality TV Show?


What if “The Big Lebowski” was an 8-bit video game?