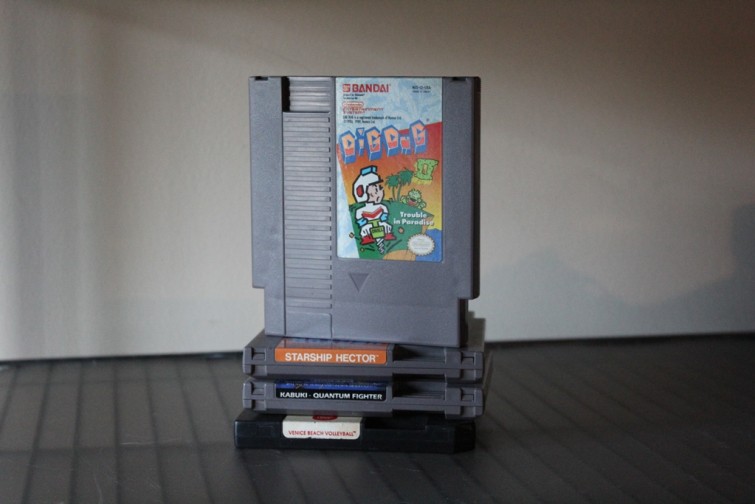 This was the third time in the NES Quest that I received a care package from a fellow retro game collecting friend who I hadn’t officially met in real life. This time, it was four games from my friend Walter (Wally), who also happens to be mutual friends with two other collector friends, Dano and Doug.

Dig Dug II: Trouble in Paradise is the highlight for me. I was a big fan of Dig Dug for the original Game Boy, and I’ve never played the sequel on the NES. Dig Dug was a huge arcade game that never got the sequels or reboots that it deserved. After Dig Dug II was released in 1989, it didn’t receive a true sequel until 2005 with the DS game Dig Dug: Digging Strike, which garnered lukewarm reviews.

Starship Hector and Kabuki Quantum Fighter are two games I’ve never played but were released by two of my favorite NES-era gaming publishers: Hudson Soft and HAL Laboratory respectively. Venice Beach Volleyball is a much needed 19th addition to my unlicensed NES collection. Venice Beach Volleyball is one of 19 unlicensed games released by American Video Entertainment on the NES, including (appropriately for this post) Wally Bear and the NO! Gang.

Wally is far and away one of the most generous collectors who I’ve (virtually) met. And I’m definitely excited to find some sweet Nintendo loot to reciprocate this awesome gesture.

This haul brings my collection from 330 to 334 NES games. For the rest of the entries of NES Quest, check them out right here on Retro Chronicle.