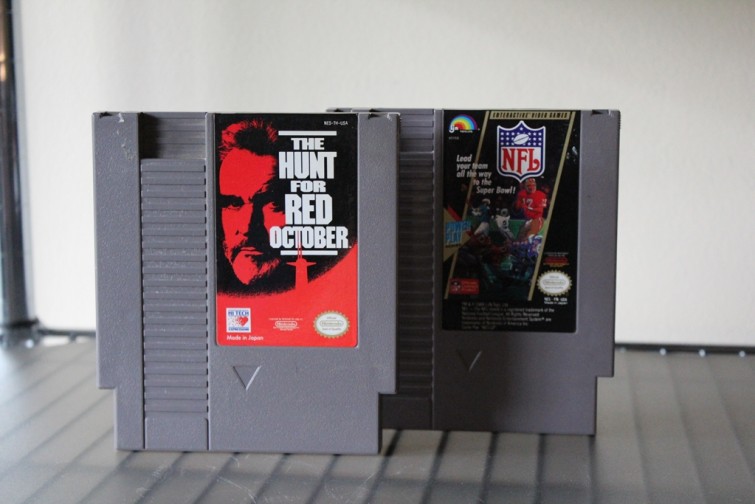 Never in the NES Quest have I had so little to say about new finds. I found these two games in random junk boxes at two different garage sales last month. Both were a couple dollars each, and both were on my wanted list.

The Hunt for Red October was released for the NES, Game Boy and Super Nintendo. Interestingly, it was one of three different video game adaptations of this narrative. Another was a computer game based on the movie. And before that, there was a video game based on the book. This version of the game featured deep sea combat, side-scrolling action and cinematic sequences. And the Super NES version is one of only a few games that uses the Super Scope accessory.

NFL Football is the first video game to be licensed by the NFL. Intending to loosely represent the 1988-89 season of the National Football League, the game uses the teams and play formations of that particular era while avoiding usage of the players’ names, due to a lack of an NFLPA license, which was given to Tecmo’s Tecmo Bowl. Temco Bowl seems to be regarded as the better of the two football games.

This haul brings my collection from 281 to 283 NES games. For the rest of the entries of NES Quest, check them out right here on Retro Chronicle.

Why Pikmin 3 May Become a Huge Collectible for Nintendo Fans