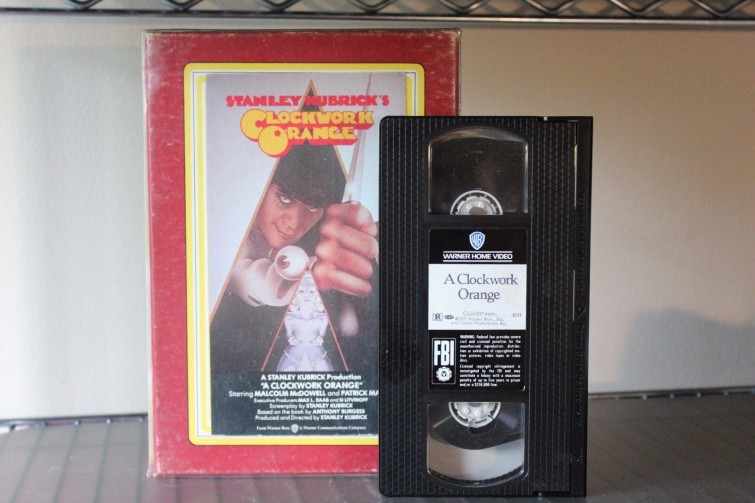 Stanley Kubrick is a cinematic mastermind. His attention to detail is incomparable and his work is often controversial. That’s why I was excited to find this difficult to find VHS rental copy of his 1971 film A Clockwork Orange at a local thrift store for $1.

For those who aren’t familiar with this movie, A Clockwork Orange is a 1971 dystopian crime film adapted, produced, and directed by Stanley Kubrick, based on Anthony Burgess’s 1962 novella A Clockwork Orange. It employs disturbing, violent images to comment on psychiatry, juvenile delinquency, youth gangs, and other social, political, and economic subjects in a dystopian near-future Britain.

In my research, discovered some interesting information about the Catholic community’s stance on the film. Because of the explicit sex and violence, The National Catholic Office for Motion Pictures rated it C (“Condemned”), a rating which forbade Roman Catholics seeing the film. In 1982, the Office abolished the “Condemned” rating. Subsequently, films deemed to have unacceptable levels of sex and violence by the Conference of Bishops are rated O, “Morally Offensive.”

In the United States, A Clockwork Orange was rated X in its original release. Later, Kubrick voluntarily replaced approximately 30 seconds of sexually explicit footage from two scenes with less explicit action for an R rating re-release in 1973. Current DVDs present the original edit (reclassified with an “R” rating).

Primarily there were two changes to the edited version of the film:

In the x-rated version– There are more graphic sexual position shots of Alex with the blond including one where he mounts her from behind and more time is spent with both girls at once in the last shots. Instead of cutting anything these shots are completely replaced by totally new footage.

In the x-rated version– Right after some guys punch a man whose face is left all bloody the film cuts to a rape sequence. When Alex says “first one malchick, then another, then another” three different guys are shown raping the pink haired girl. The first guy has a wider shot so more is seen of him laying on top of her and his droogs holding her legs open. The second guy is shown from the side and the front and a third guy is shown.

In the r-rated version– The shots of the first guy are closer so you can only she the girl from the breasts up and the head of the first guy, there one shot of the second guy from the side and instead of showing the third guy there is a cut to Dr. Branom watching.