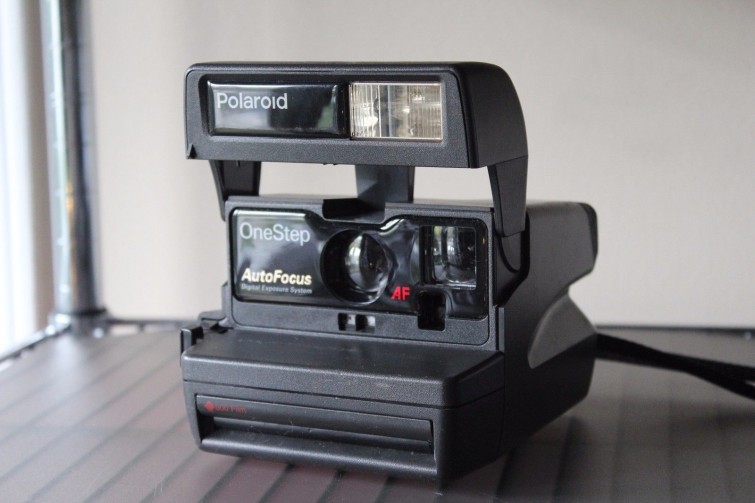 AUTHOR’S NOTE: The best-value film that I’ve found for this camera is the Impossible PRD2959 Color Film, which can be purchased right here.

This is the second One Step Flash 600 Point Shoot Film camera that I’ve found this month alone at local garage sales. For collector or photographers, these are pretty sturdy and relatively easy to repair. However, I have had better experience personally with the Polaroid One Step Express or the Polaroid One Step Silver Express.

The Polaroid One Step Autofocus (with curved corners) was part of a new generation of models (circa 1997) in Polaroid’s 600-series. They can be distinguished from the fixed focus models of this type, by the lack of a close-up adapter. The lens are 116mm, f/11, Single-element plastic. The autofocus is a simple 2-zone detection, not Sonar, sharpest at 4-5 feet.

The shutter is electronic; automatic speed between 1/4-1/200 sec. The integral auto flash works in low light but cannot be forced on or off.

The original “instant” prints that were produced by Polaroid measure 79mm (3.1″) square with a white border around them and take around 3 minutes to fully develop at 70°F (21°C). The film has an ISO rating of 640. Some Polaroid 600 cameras have ‘sonar’ autofocus and/or featured glass lenses, but most had plastic lenses with a fixed focus of around 4 feet. A “close-up” lens was often included, but this took the form of a simple plastic meniscus that slid into place, which is the case for the one pictured above.

Many of the 600 models are functionally identical to others but have different coloured fascia, names and stickers according to marketing territory. Several models were limited editions with tie-ins to icons of popular culture, such as Barbie or the Spice Girls, while other versions were promotional items made for corporate entities and are now highly collectible thanks to their rarity.

Unfortunately, I’ve yet to find any special limited edition 600 models, but I’m constantly on the look out– especially for the LegoLand edition and the McDonalds edition. I found this one for $1. It’s value is around $25 in its current condition.