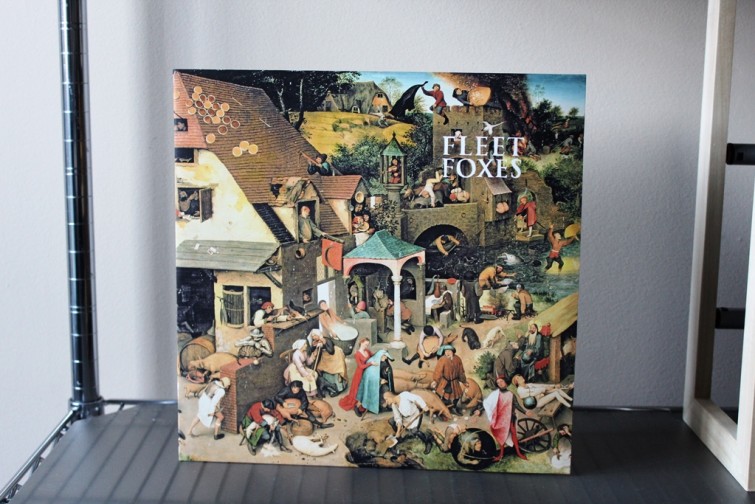 Fleet Foxes’ freshman effort is smooth and organic. But it has something that a lot of modern folk bands don’t have– pop accessibility and a story to tell. It’s atmospheric in an escapist sort of way. You listen to tracks like the opener “Sun It Rises,” and you’re lifted into a dewy mountain range. It’s both really relaxing but also lively and constantly shifting.

“Fleet Foxes” is the debut studio album by the Seattle, Washington-based band Fleet Foxes, released in 2008. The band had gained momentum on sites like Myspace through word of mouth and illegal fire-sharing. And while touring alongside Blitzen Trapper and appearing at various indie music festivals, they signed with Sub Pop Records– who also released Nirvana’s “Bleach” and The Postal Service’s “Give Up.”

On the kitchen table that your grandfather did make
You, in your delicate way, will slowly clean his fate
And you will remember when you rehearsed the actions of
An innocent and anxious mother full of anxious love

The lyrics seem to describe a couple who find and adopt a baby named Oliver James, who they find in a cradle floating in the river. I think the first time I listened to the album, I listened to “Oliver James” on repeat for several plays. It’s tranquil with its river imagery, but it will do anything but put you to sleep.

When someone asks me why I prefer vinyl over other formats, cover art is something I usually mention. You can’t appreciate certain covers when it’s on a small 5 inch sleeve. “Fleet Foxes” is a fine example of incredible album art that was chosen with vinyl covers specifically in mind. The cover is a detail of the 1559 painting Netherlandish Proverbs by Pieter Bruegel the Elder, a Dutch Renaissance painter. Pecknold explained to Mojo how the painting ended up on the front cover:

We were trying to figure out what we wanted to do, and my brother had been working out some stuff, when I saw that Bruegel painting in a book my girlfriend had. I liked that it had a really intriguing meaning, like there’s a story to each little scene. Which I just felt fitting for that record- dense but unified, not a collage or anything. And I liked its Where’s Waldo? quality, that it was something you could look at for a long time on a vinyl sleeve and find new little things.

For that reason, “Fleet Foxes” should be displayed on the wall– rather than stuffed in a record crate.

Like Bon Iver, it seems the gentlemen of Fleet Foxes craft songs around cathartic isolation (even if that probably isn’t the case). Each song seems to tell as story, even if the narrative isn’t always clear. It feels like each tune was written in a unique landscape. And “Fleet Foxes” has incredible range in its 11 tracks, rising and falling with a capella waves and acoustic strings, keyboard, flute and soft percussion.

Fans of Iron and Wine, Band of Horses and The National should all find something to love in this indie classic. Not only did the Seattle-based folk-rockers release one of the best albums of 2008, they also followed it up with an equally majestic album in 2011. “Fleet Foxes” is best listened to in a log cabin in the mountains with a smooth blended scotch. And as always, I recommend this album be spun its vinyl glory.