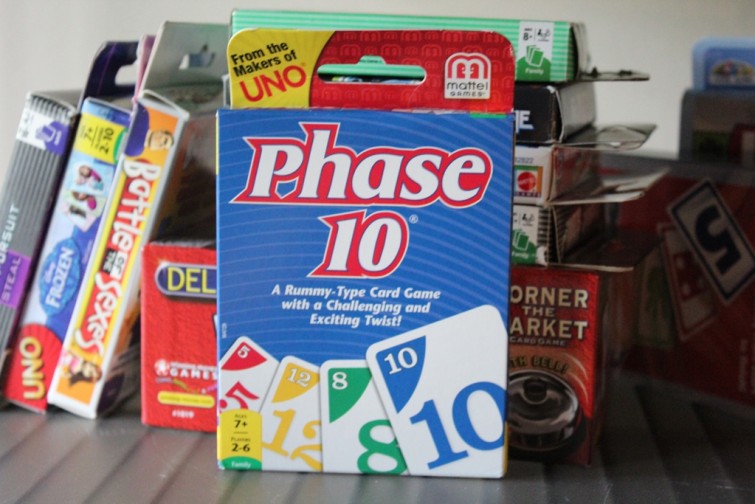 For those looking for something more accessible than a game of Poker or Rummy but more strategic than UNO, Phase 10 is a card game that you’ll enjoy playing.

Phase 10 was created in 1982 by Kenneth Johnson. It’s based on a variant of rummy known as Liverpool Rummy and can be played with two to six people. Phase 10 was Fundex’s best selling product, selling over 32,600,000 units to date, making it the 2nd best-selling commercial card game behind Mattel’s UNO.

The rules are simple. You begin by dealing ten cards to each player, placing the remaining cards in the center face-down and flipping up one card face up to the side of the deck. Each player takes turns picking up one card. The game is named after the ten phases that a player must advance through in order to win, in this order:

The round ends when someone completes a phase and runs out of cards. Whoever completed that phase, moves on to the next one, while the other players stay behind one phase. The cards that you’re left with each round count for points against you. The ultimate goal is to complete all ten phases with as few points against you as possible.

What’s great about this game is that even as you fall behind in the game, you still have a chance to make a big comeback. From my experience, someone who’s losing in the beginning stages always has a chance to come out the winner. With ten phases to work through, Phase 10 can be time-consuming. Many games that I’ve played have lasted over an hour. And for many players, that’s way too long for a single card game.

Luck does play a role, but it doesn’t determine who will win. Phase 10 requires thoughtful moves and carefully paying attention to your deck as well as the cards laid down by other players. If you’re looking for a relaxing card game, Phase 10 might not fit the bill. Even though it’s very rewarding to complete each phase, it can be extremely frustrating missing a phase by just one card– and that will happen to you far more times than you’d think.

Phase 10 comes from the makers of UNO. But personally, I feel like Phase 10 is significantly more fun and engaging than UNO. Whenever I play UNO, I or someone else that I’m playing with usually gets bored pretty quickly. But Phase 10 is a game you’ll likely to enjoy even after many of games.