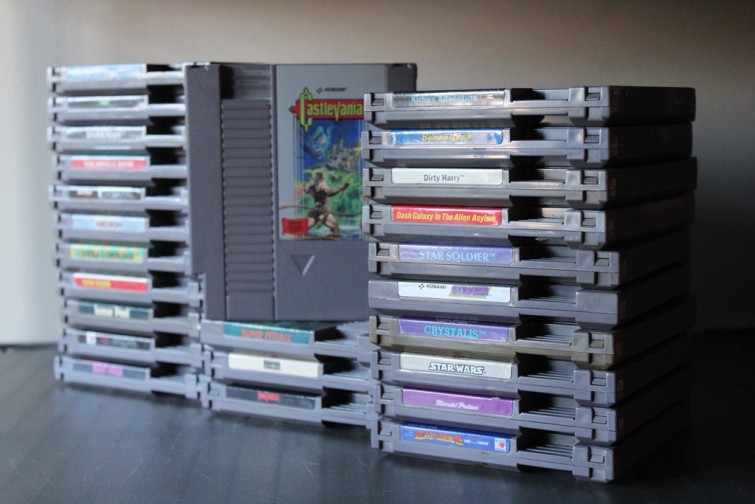 Every year, I put a little bit of extra money aside for the end of November for retro game store sales. Last year, it resulted in my biggest NES haul ever– 52 NES games for around $250. This year, my haul was about half as impressive. But it includes a lot of awesome games that I had wanted for a while. It was a busy week for me, so I was able to go to only three stores in my area that was having sales. The sales were different, but the markdown was about 35 percent off on average.

Castlevania, Final Fantasy and Kirby’s Adventure stand out the most. I adore all three, and played them a lot when I was a kid. Of the NES library, these have aged extremely well in playability. Castlevania used to frustrate me as a kid. I had a love/hate relationship with that game. The gameplay mechanics were fair, but I had a lot of trouble during the parts that required precise platform maneuvering.

Final Fantasy is a game that I remember starting, but never finishing. But now that I have it again, I may have to finish it this time. Kirby has always been on of my favorite Nintendo IPs. The originals for NES and Gameboy are fantastic. But in my opinion, the two best Kirby games ever made were both for the GameBoy Advance– Kirby and the Amazing Mirror and Kirby Nightmare in Dreamland. Absolutely addictive and imaginative.

After this haul, my NES collection is up to 360, which is about the halfway mark. I’m really happy about this period of my collecting, because I’m getting to a point where finding cartridges that I need is becoming more difficult. There’s more of a challenge, but my wanted list isn’t dwindling down to games that are too rare for me to find at all. I’m already generating some new ideas about how to approach collecting in 2016, and I’m excited to share some of these ideas with you all soon!

This purchase brings my collection from 335 to 360 NES games. For the rest of the entries of NES Quest, check them out right here on Retro Chronicle.


Legends of Localization, Book 1: The Legend of Zelda Released