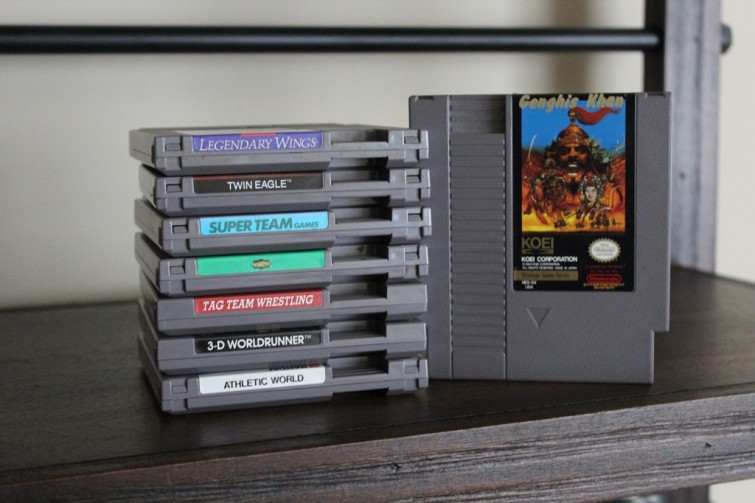 This tiny haul marks eight games from my NES licensed list and $40 from my wallet. These were around or slightly lower than market value. I purchased these from a used electronics store not terribly far from where I live. What I probably like the most about this store is that the games are frequently in impeccable condition. These look as if they’ve never been played.

Like I mentioned in previous posts, my goal is to knock out 40 percent of the NES licensed library my first year. That’s over 250 titles. With these pick-ups, although they aren’t technically found in the wild nor significantly below market value, I’m right on course to meeting those goals. Ideally, I would add about 5 new titles to my collection each week.

In my previous posts, a good percentage of the more common games were arcade ports. This haul is similar. Tag Team Wrestling, which was one of the first wrestling games to introduce a “tag-team” component, was originally an arcade game released in 1983. Seicross is a racing game, originally released as an arcade game in 1984. Twin Eagle, known as win Eagle: Revenge Joe’s Brother (in its arcade form), is another shooter.

Similarly, Legendary Wings is a fantasy-themed shoot-’em-up game released by Capcom as a coin-operated video game in 1986. This is one of my favorite genres. And since it’s also two-player, I’m excited to play it. 3-D Worldrunner is a game that I’ve never played, but I had heard great things about it. From what I know, it’s a rail shooter with really interesting graphics. It was liked enough to get a sequel in Japan.

Athletic World and Super Team Games look like games that I will definitely never play, as both require using the Power Pad. I still have my Power Pad, but I’ve never really enjoyed using it, even though it’s really neat.

I’m a sucker for historical-based games, so I was really excited to find Genghis Khan, which I had never played. This is a turn-based strategy game that was originally released on more computer-like consoles in Japan a year prior to its port to the NES. In 1989, Computer Gaming World called Genghis Khan “the toughest, most satisfying, and richest historical simulation, yet!” But it looks a bit complicated.

More so now than ever before, I’m excited about the prospect of completing my licensed NES collection. In addition to some of my other mini collecting goals (which I’ll discuss in this NES QUEST column on a later day), my immediate NES collecting goal is have 200 games by the end of the year, including one rarer game.

This haul brings my collection from 120 to 128 loose NES games. For the rest of the entries of NES Quest, check them out right here on Retro Chronicle.