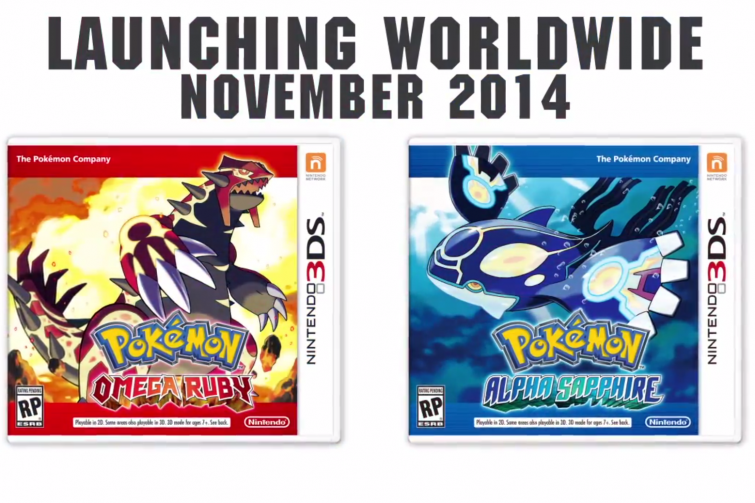 The games will be released nearly twelve years after the release of Pokémon Sapphire and Pokémon Ruby for the Game Boy Advance, which together made up the third installment of the Pokémon video game series. Both games took place in the Hoenn region, located some distance from the Kanto and Johto regions featured in previous games.

While the announcement is a enormously exciting to the fans who have been waiting for reimagined versions of Pokémon Ruby and Pokémon Sapphire, it isn’t exactly surprising. Nintendo began remaking earlier Pokémon titles beginning in 2004, when they released Pokémon FireRed Version and LeafGreen Version– Game Boy Advance remakes of Pokemon Red and Green (1996). And 2009 saw the release of Pokémon HeartGold and SoulSilver, which were remakes of Pokémon Gold and Silver (1999).

Many gaming news outlets have been quick to call Pokémon Omega Ruby and Pokémon Alpha Sapphire a remake of the two games. While this certainly seems like a remake, that may not be the case. In 2012, Nintendo released Pokémon Black 2 and White 2– sequels to Black and White (2011). The release trailer for Omega Ruby and Alpha Sapphire states, “Explore a dramatic new world!” Could this be a sequel to Ruby and Sapphire? Perhaps a prequel/sequel given the unusual names for the games?

Further details are still being kept under wraps. Will the new titles feature graphics similar to those in X and Y? What new Mega Evolutions should we expect? Could that be the mega evolutions of Groudon and Kyogre on the cover? Will there be a follow up to Pokémon Emerald, which was released two years after Ruby and Sapphire? Why are they called Alpha and Omega?

What do you think? Leave you comments and predictions in the comment section.

This was the official announcement from Nintendo:

Announcing Pokémon Omega Ruby and Pokémon Alpha Sapphire for the Nintendo 3DS family of systems! Prepare for an epic adventure exploring a world filled with Pokémon!

May the Fourth (Be With You): My VGA-graded copy of Star Wars: Jedi Arena for Atari 2600