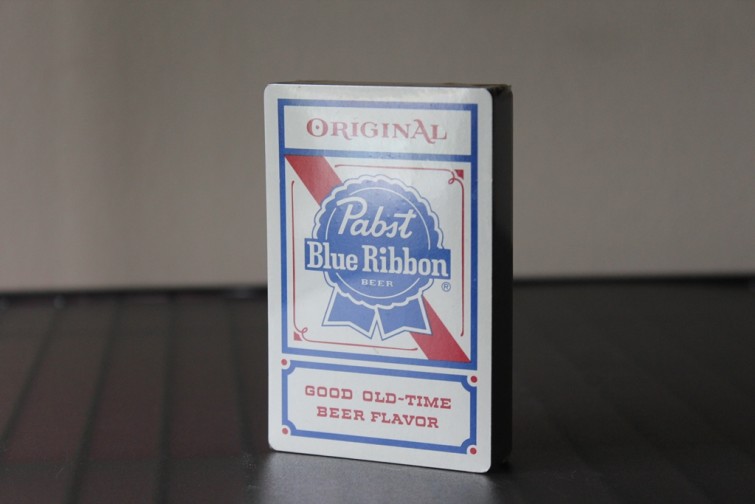 2491
By Barry Falls Jr
7 years ago
In Thrift Picks

Pabst Blue Ribbon is a beer sold by Pabst Brewing Company, established in Milwaukee, Wisconsin in 1844 and currently based in Los Angeles. Originally called Best Select, and then Pabst Select, the current name comes from the blue ribbons tied around the bottle neck between 1882 and 1916.

Charlie Papazian, president of the Brewers Association, published the following tasting notes for Pabst Blue Ribbon in 2008: “A contrasting counterpoint of sharp texture and flowing sweetness is evident at the first sip of this historic brew. A slowly increasing hoppiness adds to the interplay of ingredients, while the texture smooths out by mid-bottle. The clear, pale-gold body is light and fizzy. Medium-bodied Blue Ribbon finishes with a dusting of malts and hops. A satisfying American classic and a Gold Medal winner at the 2006 Great American Beer Festival.”

Pabst has a very unique relationship with urban youngsters and college students– mainly hipsters. While the company is not specifically open about marketing to this counterculture crowd, the popularity in hipster circles led to a sales revival in the early 2000s after a two decade-long slump.

In doing so, Pabst targets its desired market niche through the sponsorship of indie music, local businesses, facial hair clubs (RVA Beard League), post-collegiate sports teams, dive bars and radio programming like National Public Radio’s All Things Considered. And of course it helps that PBR is generally one of the cheaper options of beer– a feature much appreciated by poor, thirsty college students.

I found this pack of playing cards at a garage sale for 50 cents. I was able to sell it a few days later online for $30. Generally, Pabst Blue Ribbon merchandise is something I like to look out for when I’m picking. Old PBR-themed merchandise like old trucker hats, belt buckles, beer signs, food trays and lights have huge collectible value.