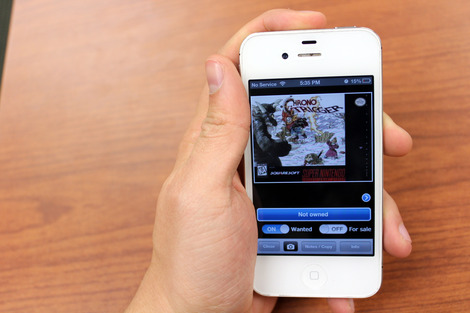 After coming home from video game hunting, Pieterjan Vandegaer pondered a new way to keep track of his growing video game collection. His solution? A series of mobile apps designed to help gamers input titles from their own collection, track the games on their wanted list, and calculate the total value of their collection.

Each app currently costs $4 on Apple’s App Store and contains a database of information on every title, including the games’ box art, rarity level, pricing information and condition. When you input what games you have, it automatically keeps track of how much your collection is worth, what games are on your want list, and what games you have duplicates of.

Currently, there are 10 different apps for 10 different consoles including Super Nintendo, Nintendo 64, Atari 2600, Playstation, and Sega Genesis. Much to Vandegaer’s surprise, the apps have received over 20,000 downloads and counting.

“Initially, I did not expect to make any sales since it was catering to a very specific audience, but I was pleasantly surprised by the feedback the apps received,” Vandegaer said. He was pleased to see that many are as passionate about game collecting as he is.

According to Vandegaer, all his apps use the same coding, which allows him to focus on building up the database behind the applications instead of tinkering with each individual app. Nevertheless, developing each app can be a tedious process.

For each new app release, Vandegaer likes to add new features, which are then get back-ported to the already existing apps. Even after the release of an app, Vandegaer has to take into account the time needed to do some fine-tuning.

“Actually a little bit of everything,” he said. “My library consists mostly out of a Nintendo Entertainment System (NES) games and Sega Game Gear games, but I also have some Super Nintendo, Nintendo 64, Master System, and Genesis games. Around 150 games in total, but that’s relatively small compared to our users.”

According to Vandegaer, some users of his apps have nearly complete NES sets cataloged using the apps.

With only 10 video game consoles under his belt, Vandegaer is lacking in several key consoles. But he’s working on it. Currently a Game Boy and Game Boy Color app is on its way, which he hopes to finish soon. His goal is to develop an app for every console. The Playstation 2, XBOX, Sega Saturn and Sega Dreamcast are amongst the most frequently requested apps that he’s currently lacking.

In the meantime, he is working on adding more interactivity between software users so they can discuss games, rate them and use the app as a platform for trading and selling games. Additionally, the database behind the apps will be expanded to include more information such as video game accessories, region information, and release dates.

I asked Vandegaer what advice he would give to someone who has an idea for an app but doesn’t know where to begin.

“If you have any programming experience, give it a shot building it yourself. Apple has released some great tools that can assist in building an app. Write down all the things you want your app to do, start with the easy ones and work your way up to the more challenging parts,” he said.

This article was originally published with Yahoo News. Vandegaer’s apps are available for iPhones and iPads by accessing the iTunes App Store. For more information about Vandegaer and his apps, visit his website here.

My first experience with the Video Game Authority