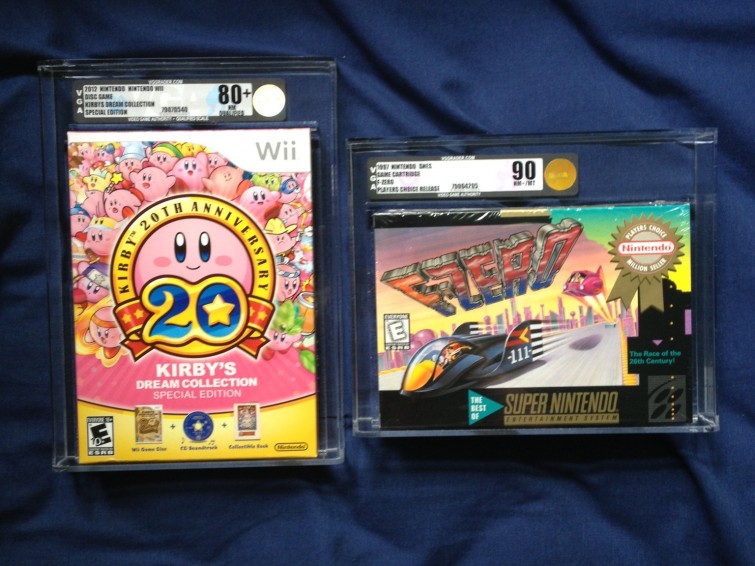 My first experience with the Video Game Authority

A couple years ago, I came across a box of six uncirculated copies of F-Zero for the Super Nintendo. Between the time when I purchased them and now, they rested undisturbed in the back of my closet. It wasn’t until years later that I rediscovered the unopened titles and began doing research on the Video Game Authority (VGA).

With a little extra money that I had left over from Christmas shopping, I decided to go ahead and submit the six copies of F-Zero as well as my two copies of Kirby Dream Collection for the Nintendo Wii that I just had lying around.

The total cost ended up being around $40 per game being submitted, a hefty sum. But I figured it would just be something that I should try at least once.

I understand many collectors are not the biggest fan of the VGA (or maybe just the idea of the VGA). And to those people, my decision to submit anything at all was a mistake. But the resale value undoubtedly increases and it certainly provides some peace of mind for collectors who are skeptical about the authenticity of a purchase.

I honestly don’t know what all the fuss about VGA is all about. Maybe some collectors know something that I don’t know. Maybe some have had poor experiences with the organization. If so, please tell me about it in the comment section.

Anyway, fast-forward to last night (two and a half months after I submitted the games), I received the package back and was very pleased with what I saw. All eight games received graded high in thick protective display cases. Exactly what I was hoping for.

Well, except for two minor details.

Firstly, Kirby Dream Collection received a “Qualified Grading Scale” rating. This was apparently given to the game, because it was a special edition boxed game, and while the game inside was sealed, the outer box had shown signs that it had been opened. I did purchase that one from a local store that had the game out on a shelf for any to ruffle through.

Secondly, the F-Zero games did not received the coveted “uncirculated” rating that I was hoping for. I was under the impression that if you sent in the box that the six games came in from the manufacturer, the game would receive a “U” for uncirculated. Apparently, it has to come in the box unopened. Whoops.

No worries. My copies of F-Zero were still Gold-rated, which means “Near Mint+/ Mint.” And the Kirby Dream Collection game is just cool to have.

As far as a big monetary invesetment, these eight games aren’t exactly a goldmine for collectors. Yes, F-Zero was a classic and is still beloved and sought after by many. And yes, the Kirby Dream Collection contains six of the best titles from the franchise, a booklet that highlights Kirby’s history, and a soundtrack containing music from multiple series entries. Plus, special edition anthologies typically hold their value.

However, one factor makes these games far less valuable than other similar titles– they are not as uncommon as you’d think. Kirby Dream Collection is still on the shelves at many stores, and they’re not as popular as the Mario All Stars 25th Anniversary compilation released on the Wii two years prior. VGA-graded copies of Mario All Stars for the Wii are currently worth more than twice Kirby Dream Collection.

Additionally, a large stash of previously-uncirculated copies of F-Zero have been making its rounds across the retro gaming community for the past couple years, making them far less valuable.

In total, this collection is only worth somewhere in the realm of $350. But, I anticipate the copies F-Zero to go up in value gradually.

So the ultimate question is: would I submit anything into VGA in the future? The answer is yes. I acknowledge that the idea of having on central gaming authority to grade your games is a bit conceptually absurd to some. But for me the benefits of having a gorgeous, indestructable display case and an official note describing its condition and verifying its authenticity removes most prior reservations I had about the VGA.

I’ll be on the lookout over the next few years for sealed games for my next submission. If you have had an interesting VGA experience, please share it with me in the comment section.