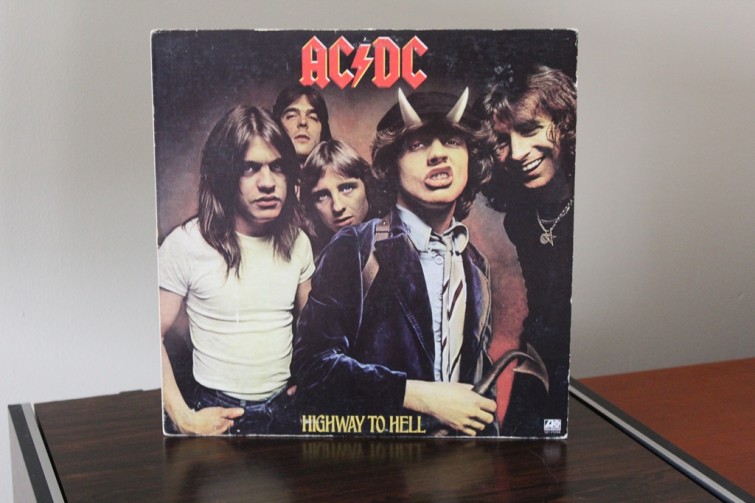 BETWEEN THE GROOVES: AC/DC’s “Highway to Hell”

I’ve had this copy of “Highway to Hell” so long that I don’t remember where it came from. But every time I have a party at my apartment, this record is sure to come out.

Highway to Hell is the sixth studio album by Australian hard rock band AC/DC, released on 27 July 1979. It is also AC/DC’s fifth international studio album. It was the last album featuring lead singer Bon Scott, who died early the following year from over-consumption of alcohol. Scott literally partied himself to death just weeks after the release of this album.

It was originally released by Albert Productions, who licensed the album to Atlantic Records for release outside of Australia, and was then re-released by Epic Records in 2003 as part of the AC/DC Remasters series. On 25 May 2006, Highway to Hell was certified 7x Platinum by the RIAA.

“Highway to Hell” remains my very favorite AC/DC album to date as it viciously celebrates drinking, sex and mischievous behavior. The guitar riffs and infectiously energetic. This ten-track album holds some of the band’s greatest and most timeless tracks to date. The album’s title track reflects the incredibly arduous nature of touring constantly and life on the road.

One of my favorite things about this and other AC/DC albums is the cover art. The band always released these incredible gothic covers that earned them notoriety among parents who were scared that their kids were listening to the devil’s music. This album certainly contributed to that, although it’s relatively tame compared to the over of other AC/DC albums such as “If You Want Blood,” which shows a guitar going through someone’s stomach.

What makes AC/DC stand out among the many other so-called classic rockers is that they always rock. They rocked since their debut album and 40 years later they rock now. AC/DC were inducted into the Rock and Roll Hall of Fame in 2003. During the ceremony the band performed “Highway to Hell” and “You Shook Me All Night Long”, with guest vocals provided by host Steven Tyler.

In 2003, the album was ranked number 200 on Rolling Stone magazine’s list of the 500 greatest albums of all time. This year, the record was remastered and rereleased on vinyl. So if you’re looking to snag a new copy of Highway to Hell on vinyl, it should only cost you about $15-20.

A brief history of the iconic emerald green Banker’s Lamp