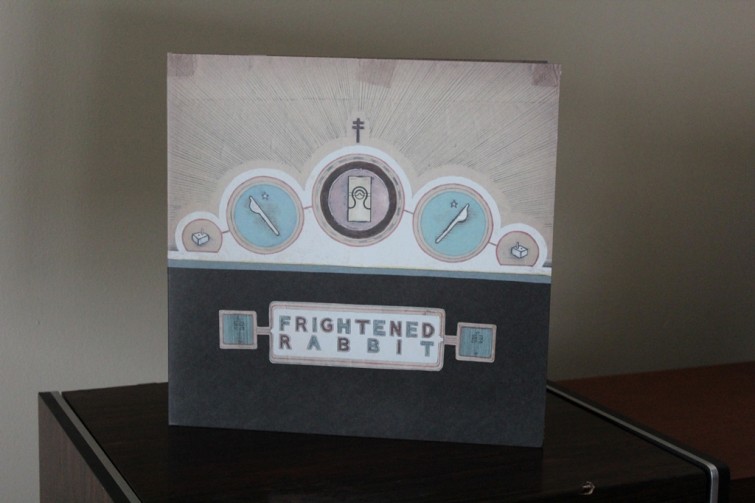 BETWEEN THE GROOVES: Frightened Rabbit’s “Winter of Mixed Drinks”

It’s hard to talk about this album without seeming hyperbolic. “Winter of Mixed Drinks” is one of my favorite albums of all time and features some of my favorite cover art to boot. When people ask me why I prefer purchasing some albums on vinyl, I often mention how great the album art often looks on the 12-by-12 inch cover. And The Winter of Mixed Drinks is usually the album that comes to mind.

Frightened Rabbit lead singer Scott Hutchison is a gifted artist. He designed the cover with many of the little symbols, like the double cross, that would later appear as a staple for the band on later albums. It has a hypnotizing, hand-drawn design that you have to stare at up close to really appreciate. And it somehow perfectly embodies everything you’ll hear on the record.

The third album of the rock group is a significant change of pace from the raw, self-loathing tracks of Frightened Rabbit’s sophomore album, Midnight Organ Fight, quite possibly the most passionately honest break-up album to date. But you won’t find that tone of self-wallowing in Winter of Mixed Drinks. At least not throughout. As Hutchison explains in “Not Miserable” the climax of the album, “most of the misery’s gone.”

From the techno thumping sounds stemming from “Skip The Youth” to the oceanic textures of “Swim Until You Can’t See Land,” Frightened Rabbit displays vast emotional growth between Midnight Organ Fight and Winter of Mixed Drinks with the addition of new band members.

Winter of Mixed Drinks is the most dynamic work of the band’s career. Frightened Rabbit continues to explore themes on the role sex plays in a relationship with mild innuendos. In “Nothing Like You,” Hutchinson describes moving forward intimately with someone new after a damaging break up, “I am bruised but she is patching my wounds and night nursing a broken man.” He goes on to admit that, “she was not a cure for cancer; all my questions still ask for answers.”

Alongside Plants and Animals & The Phantom Band, I recently had the opportunity to witness Frightened Rabbit rocked Neighborhood Theater in late October, verifying that they are even better live than in the studio.

From Winter of Mixed Drinks, Rabbit played the highly danceable “Living in Colour” with awe-inspiring energy. The audience went crazy when indie group began “The Loneliness” and sang the outro chorus in perfect sync. In 2008, Frightened Rabbit gave us one of the most soulful concept album of its young career. Earlier this year, they gave us a follow up album full of pulsing melodies and an overwhelmingly hopeful motif of fervent imagery.

From the lyrical simplicity of “Not Miserable” to the bass harmony of “The Wrestle,” Frightened Rabbit once again proves to be one of talented and honest bands to come out this past decade, making Winter of Mixed Drinks one of the best albums in the past decade.