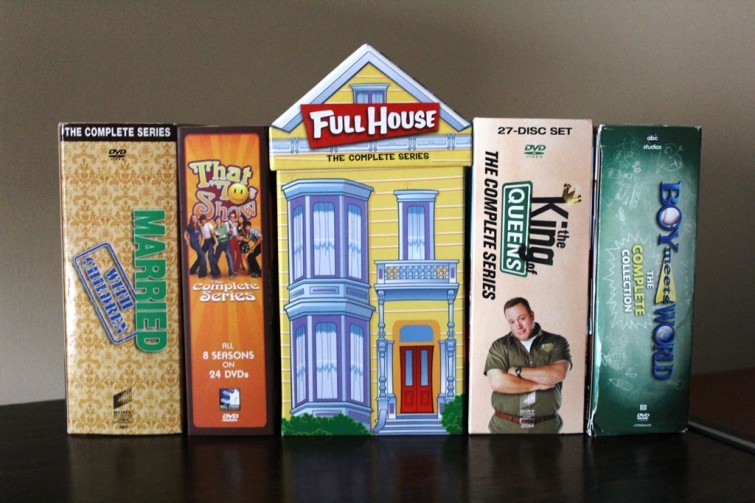 1364
By Barry Falls Jr
8 years ago
In Television

Despite the conveniences of online streaming services like Netflix and Hulu, I love owning television series on DVD. And I especially love complete series box sets. Over the years, I have accumulated a large collection of some of our favorite programs– with many of them in box sets.

This post will also serve as an introduction to a new series I’ll be doing with guest writers, as we review television box sets and recount some of the nostalgia associated with them.

I wanted to post a buyer’s guide to television box sets based on my experiencing building a collection. But instead, I think it would be more beneficial to simply share some ideas to consider when you’re in the market for new seasons. Here are some questions to ask yourself:

How important is consistency?

From 2004 to 2005, Walt Disney Studios Home Entertainment began releasing the first three boxed seasons of Boy Meets World. Because the sales figures did not meet the company’s expectations, no further seasons were released. It wasn’t until 2010 when Lionsgate Home Entertainment had acquired the rights to the series and began releasing them. But by then, they had switched from the larger box set seasons, to the standard DVD size seasons.

Personally, I hate my seasons not matching. Each season of the program has to be the same size and shape box– all DVDs or all Blu-ray. So I held off on buying seasons four to seven of Boy Meets World until 2013, when the complete series was released in one convenient set. Of course, these are my own silly preferences. So if you don’t mind a little inconsistency in your collection, the process might be a little easier.

Which seasons do you already own?

Keep a record of what you already own. I keep mine in a Google Doc, which stores the seasons I own, what format they’re in and which seasons I want. Keeping track of which you own will make it easier to decide whether it would be worth it to upgrade to a complete series. If I see a complete series go on sale for $50 and I know I can get $15 from the two seasons I already own, I’ll likely upgrade.

Do you own any seasons that you no longer want?

Selling unwanted seasons, DVDs, games or books can help help defer the cost of new additions to your collection and clear more shelf space. Do your research where to get the most money for your stuff. I have a few local used media stores that offer about 30 to 40 percent store credit for gently used seasons. Selling seasons on eBay can also be a smart route. I recently my fiance’s complete box set series of Deadwood for $55 on eBay.

Do you want it on DVD or Blu-ray?

This topic can be hard to address, mostly due to the vast subjectivity of the viewer. Some shows are significantly better on Blu-ray, some shows’ change in resolution may not justify higher prices. Generally, I buy sitcoms on DVD and dramas and thrillers on Blu-ray. Shows like Friends or Scrubs are just fine on standard definition, but I prefer experiencing programs like Breaking Bad and American Horror Story in full HD.

Do you know where to look?

So many options. I buy a lot of my collection used to save money. So I frequent local second-hand media stores and thrift stores. Those are usually good for buying common seasons for cheap prices. Target and Best Buy frequently have great sales on TV series as well as Amazon, which stocks many of the seasons that you won’t be able to find anywhere else. Check out sites like Daily DVD Deals for daily deals on TV shows and movies.

How popular is this show?

Popularity has a huge impact on prices, and not always the way you’d expect. I recently purchased the three-part, first season of my favorite childhood program, Pokemon, for $45. But weeks later, that season was added to Netflix. So do you think it’d go up or down in price? It went up to $77, despite it being available to stream for free.

Contrarily, the popularity of The Office has led to mass production of the seasons. My local thrift store receives seasons of The Office so frequently, that they’re usually sold for a few dollars. Shows that used to be more popular than they are now like King of Queens and That 70s Show often are sold at discounted prices. I purchased both complete series in box sets (which retail for about $65 to $70) for $25 each from Best Buy. While they’re not always easy to anticipate, paying attention to trends in popularity could save you money in the long run.

Complete series come in different sizes and shapes. For me, I almost always stick to series that can fit on a standard DVD-size shelf. This idea reflects what I’ve already mentioned about consistency. In the same way that I prefer my seasons match, I also prefer that my series all be generally the same shape. So far, the only exception I’ve made is for the complete series of Full House , which is shaped like the titular house. And that’s awesome.

How soon do you want to own it?

Like with any purchase, holding off for the right price can save you a lot of money. Back to the case of Boy Meets World. By 2013, the complete series box set was released and selling for $100, which was a bit more than I was willing to pay. I had the first three seasons already. So I found the lowest price for the series, which was at Hastings Entertainment, Inc. for $60. Then I waited for them to have a 40 percent off sale on DVDs and paid about $40.

Ultimately, if you’re interested in starting or building on your television box sets, I strongly recommend you do your research and go into it with a plan.

Look back at the Year of Luigi


BETWEEN THE GROOVES: Frightened Rabbit’s “Winter of Mixed Drinks”