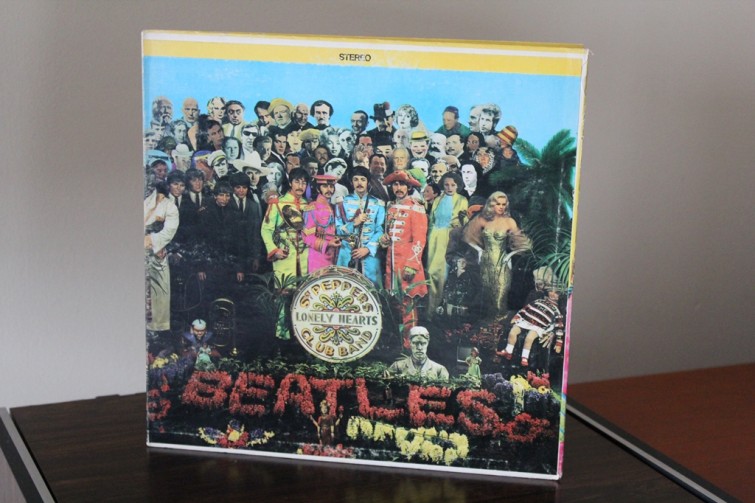 In the entire Beatles discography, Sgt. Pepper’s Lonely Hearts Club Band stands out the most– almost as if it was performed by an entirely different band. That might be because in 1967, the band set out to record an album that represents a performance by the fictional alter-ego Sgt. Pepper band, giving the band the opportunity to musically experiment. Released on June 1967, t was the eighth studio album from the band.

With 13 of the most easily-recognizable rock/pop tracks ever recorded, the ambitious effort has aged incredibly well. I have one of the earliest pressings of the album from 1967. In September 2014, Sgt. Pepper’s Lonely Hearts Club Band was rereleased on mono vinyl. It’s available here on Amazon.

Regarded as one of the first art rock albums, Sgt. Pepper was one of the most progressive albums of the decade and perhaps the greatest album of all time. An important work of British psychedelia, the multigenre album incorporates diverse stylistic influences. And it helped inspire countless future bands who would similarly incorporate back stories to produce albums with theatrical undertones.

Around the time it was recorded, The Beatles were in a dark place in their career. Their messages– about culture, religion and society– proved controversial around the world. Their touring in 1960s left them uncertain of whether they would move forward as a band, as they continued to take increasingly bitter public criticism. With Paul McCartney leading the musical and lyrical efforts with this album, Sgt. Pepper added even more controversy to the band’s image, with many of the songs containing rumored allusions to drug culture. Some were brushed off, but some the band confirmed as valid.

Ultimately though, the album beautifully represents many of the cultural changes that were happening in the 1960s. A book-long analysis could and have been written about each song on the album. Die-hard Beatles should definitely check out some of the many books on the band’s creation, evolution and legacy. The Cambridge Companion to the Beatles, a collection of essays, is a great start.

1. Sgt. Pepper’s Lonely Hearts Club Band
2. With A Little Help From My Friends
3. Lucy In The Sky With Diamonds
4. Getting Better
5. Fixing A Hole
6. She’s Leaving Home
7. Being For The Benefit Of Mr Kite
8. Within You Without You
9. When I’m Sixty Four
10. Lovely Rita
11. Good Morning Good Morning
12. Sgt. Pepper’s Lonely Hearts Club Band (Reprise)
13. A Day In The Life

What’s your favorite track on the album?