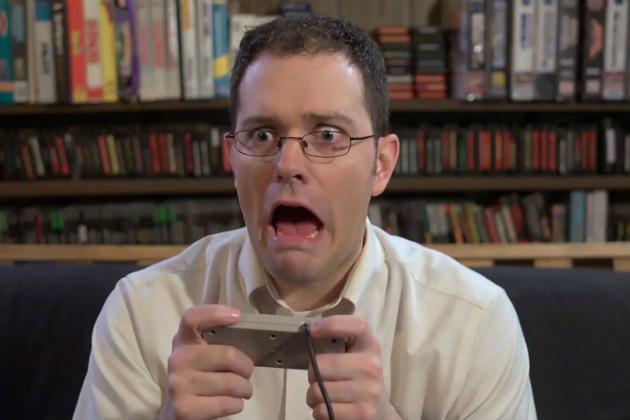 Back then, the Angry Video Game Nerd was just a joke character. The Nerd would play terrible videos games and create new curse words to express his disdain, even though the games he played were decades old. He’d dress in stereotypical nerd clothes, white button up, glasses and a pocket full of pens, drink Rolling Rock beer to ease the pain and often destroy the games he played out of frustration– all elements that would later become reoccurring motifs for the series.

YouTube exploded with positive reception, even though YouTube wasn’t that big back then. Fans demanded more, and Rolfe gave it to ’em. As of today, James has released 114 Angry Video Game Nerd episodes covering the Virtual Boy, the Zelda CD-i titles and essentially all of the NES accessories.

Nostalgia plays a large role in James’ success. Fans love to relive some of the laughably terrible titles that were released on the beloved NES console. But perhaps what makes the series even more appealing is James’ personality. He is a down-to-earth, funny guy, who says that making film has been a means to overcoming his social anxiety– possibly something many of his fans can relate to.

But James wasn’t satisfied confined to the popular video sharing site. So in 2011, James and company headed to Los Angeles in attempts to find a production company to back his first on-screen venture. But when he was unable to get the attention of funders, he took to crowd-funding his project through Indiegogo, hoping to raise about $75,000 in start-up cash. Instead, fan support poured $325,327 into the project.

The b-movie-inspired film, which will likely be released later in 2014, centers around the alleged burial of over 1 million copies of the proclaimed “worst video game of all time,” E.T. the Extra-Terrestrial for the Atari 2600. The Nerd embarks on a quest to prove that there is nothing buried there after being pressured by fans to review the video game, while being pursued by federal authorities who believe he is investigating Area 51 and the crash of an unidentified flying object.

Angry Video Game Nerd: The Movie has already amassed a considerable amount of excitement. James’ story has always been a fascinating one. Fans have been able to witness the rise of an awkward kid from New Jersey become an internet sensation, and now a feature director.

N.Y. Daily News penned an in-depth story on the resources and dedication that went into producing James’ first full-length feature. All photos courtesy of CINEMASSACRE.com, where you can also stay up to date on everything James is producing. Check out the seven-minute long preview of Angry Video Game Nerd: The Movie right here–

GAME/SHOW: What Does Your Favorite Game Genre Say About You?