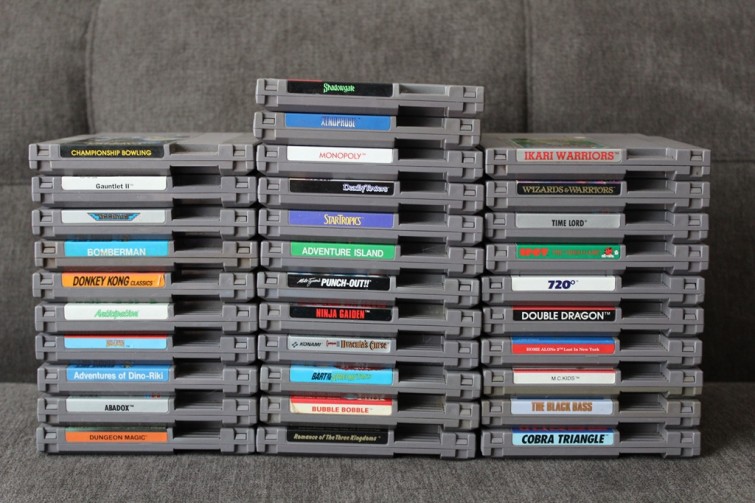 Over this past week, I made a trip to a used electronics store in North Carolina, where I traded a bag full of unwanted games for 32 NES cartridges off of my wanted list.

If you’ve kept up with my yard sale haul series, you know that I accumulate a lot of games and films that go in my trade pile. When I first pick up games that I find for cheap but don’t want to add to my collection, I put them in a separate corner of my room where they go through the process of being traded. The process usually takes between two weeks and three or four months.

First, I see if the collectors in my network are interested in the games. I’ll usually post a picture of everything I have for trade for #ForTradeFriday. And I’ll slowly trade off whatever other collectors want for games that I’m interested in having. Often this will take about a quarter of my games, most of the retro games.

Second, I see if any games are worth selling. I make this call based on whether or not I can get more in pure profit (after taxes, shipping and other seller fees) than 60 percent of the games market value. If so, I sell. And usually that money stays in my Paypal account until I make a purchase on eBay or Amazon. This usually takes less than a quarter of the original pile of games.

Third, if I don’t believe I can make more than 60 percent of the games’ market value, I accumulate the games or films into a box until it’s full.  And when it becomes full, I take it to one of several different used electronics stores that have popped up around North Carolina to trade it. I go to several different stores, but a few I usually avoid if I feel the store isn’t managed ethically or if they give too little store credit.

This is where most of my unwanted games end up. This week, I traded games that I had accumulated over about a month of garage sale hauls and game lots that I had purchased online. I took it to a store that I happened to be near, and traded it for a little over $200.

Of course, by the time the guy had tallied up the total value, I had already searched the store for the NES games that I wanted to add to my collection. That included about 25 common games that ranged from $2 to $8 and about 7 perhaps equally common but more desired, thus more expensive titles like Donkey Kong Classic, Ninja Gaiden, Double Dragon, Punch-Out and Bomberman.

With the 32 games, I spent all of the trade credit that I had accumulated that day. And was certainly happy to do it. Not only is this the biggest NES haul I’ve ever purchased (at 4.5 percent of the licensed NES library) in one place, but several of the games I have wanted to play for a long time.

For example, I’ve never played the original Bomberman, despite being a big fan of the franchise. Bomberman Tournament is one of my all-time favorite Game Boy Advance games. And it’s extremely addictive and one of the most under-rated games on the console. Strangely it’s kind of an RPG and heavily borrows from the Neutopia series, also made by Hudson Soft. It has a lot of elaborate elements to the gameplay. So it should be interesting playing the original.

Ninja Gaiden is a game that I was never able to get very far at when I was a kid. And I’m sure this is still the case now. Double Dragon has been on my list for a long time as well, as the beat em up is one of my favorite genres, as long as it offers cooperative play. And Punch-Out is a game that I remember being moderately good at but never finishing it.

So far, this has been the biggest NES haul for me. And though I purchased it from an electronics store at market value, I’m happy that I didn’t have to pay any money out of pocket. But I think I might need to adjust my approach for the next trade. This time, I tried using all of my credit to mark off common titles in bulk. Next time, I may trade the games in for credit and save it for when they have a rare NES title for sale.

Since this haul, I’ve already accumulated a few big bags of games for trade. And if I continue to save up games for trade, I could end up Flintstones Surprise at Dino Peak or Little Sampson without having to pay a cent. But now I’m just being overly optimistic.

How to Beat The First Level of Super Mario Bros. 3 Without Looking at the Screen [VIDEO]