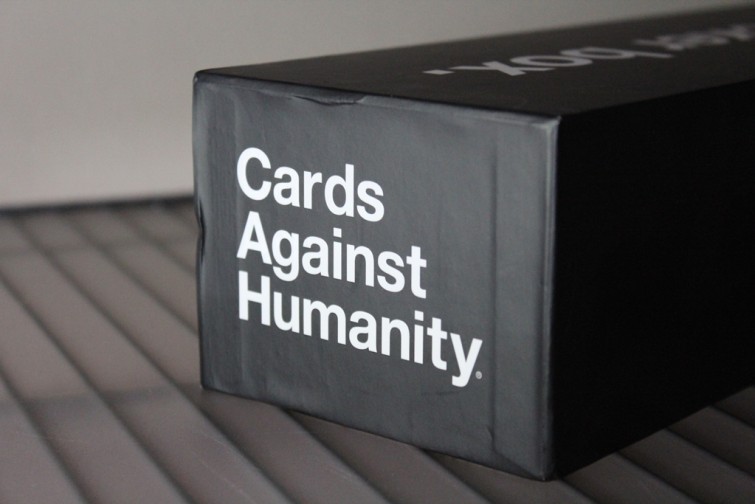 About the creation of the card game, co-creator Ben Hantoot said:

The lot of us have been friends since middle school, and since then we’ve had yearly New Year’s parties. With each year, more and more people would show up, and we started to need to come up with structured activities so that we could avoid engaging in normal socialization or black-out drunkenness. One year, we had the idea to create our own game rather than try something established. We called it Hyper-theticals, and it involved each person in the group writing an answer to an absurd question (e.g. If you could append a vagina to your body, where would you put it). A judge would read all the answers, pick his favorite, and try to match it to the person who wrote it.

This game was fun, but in practice it was just too difficult to play. It involved too much writing and didn’t really work with strangers, since the answers all had to be directed very specifically at whoever was the current judge. The next year, we came up with Cards Against Humanity, which takes the same concept but pre-writes all the questions and answers. We played it with a very large group the first time we played, and it was a great success.

According to Hantoot, the game was inspired through experience with various games such as Magic: The Gathering, Balderdash, and Charades. It was developed by about eight core writer-creators, 5 or 6 part-time developers and dozens of friends who helped test the game through multiple play-throughs.

As the name of the game suggests, political-incorrectness is a major theme of the game. The game’s tagline reads “A party game for horrible people,” which should serve as a fair warning for anyone who might be offended by the game’s content. Nothing is off limits– religion, sex toys, incest, bleached anuses, racism and 9/11. In the end though, the shock value of the game is harmless and in good nature.

Newcomers should become familiar with the rules of the game within a minute. People who have played Apples to Apples will already be familiar with how the game works. Each player draws ten white answer cards. One player is chosen as the Card Czar and draws and reads aloud a black question card. Each player must answer the question with the white answer cards. The Card Czar reads aloud the answers and chooses the best one. The person who played the card gets to keep the black card, and earns a point. Each round, a new Card Czar is appointed (everyone takes turns).

Due in part to the game’s marketing efforts, Cards Against Humanity continues to be a huge hit. The Chicago Sun-Times estimated that Cards Against Humanity earned at least $12 million in profit, and according to the company customers have downloaded the PDF file 1.5 million times in the year since they began tracking the numbers. Much credit is should be given to the progressive nature of the game’s development and release. The idea was simple but much attention and detail was put into perfecting the game to its final product. The game’s Kickstarter campaign also contributed to the success,

While perhaps not openly acknowledged or marketed as such, there is a collectible value that the game offers. Cards Against Humanity offers an accessory to the game called The Big Black Box, which I’ll review on a later day. This is basically a box specifically designed to hold both the primary game and its expansions. And it certainly compels the player to buy every expansion pack– which will become necessary the more you play the game to avoid using the same cards over and over again.

ORDER CARDS AGAINST HUMANITY RIGHT HERE. AND CHECK OUT OTHER POPULAR BOARD AND CARD GAMES HERE.


Why Pikmin 3 May Become a Huge Collectible for Nintendo Fans