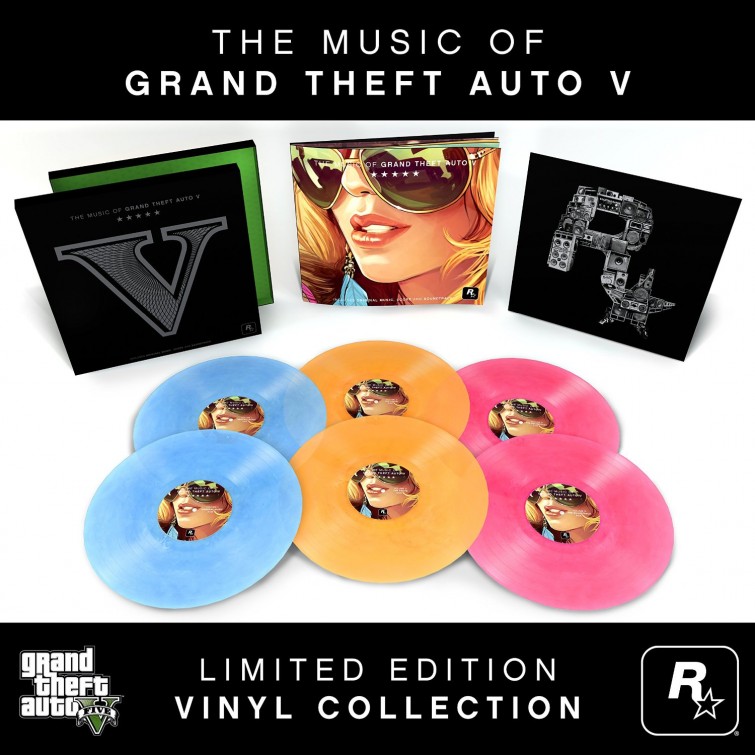 UPDATE: The Music of Grand Theft Auto V: Limited Edition LP Collection is now available for pre-order on CD and vinyl right here. With only 5,000 units being sold worldwide, according to ROCKSTAR, these releases are sure run out quickly.

To celebrate the release of the new, enhanced versions of Grand Theft Auto V for PlayStation 4, Xbox One and PC, ROCKSTAR Games will be releasing limited edition collections of the game’s star-studded soundtrack on both CD and Vinyl, in collaboration with Mass Appeal Records.

The vinyl collection will feature a total of six vinyl records, a full color booklet and an exclusive lithograph poster in a classic box-set. The CD collection includes three discs along with a branded Grand Theft Auto V gold brick-shaped USB Drive, artwork and poster all sealed in a special die-cut package.

The soundtrack was released digitally on September 24 2013 in three volumes, including an original score composed for the game in addition to selections from songs that were licensed for the in-game radio. Critical reception to the soundtrack was positive, as reviewers considered that the music had been appropriated effectively for gameplay.

The game is the first in its series to include an original score; the work was shared between a team of producers who collaborated with each other during the game’s development. Music supervisor Ivan Pavlovich noted that creating original score for the game was “daunting” given that it would be a first for the series. Like previous entries in the series, the game also contains licensed music tracks provided by an in-game radio.

To work on the score, Rockstar brought The Alchemist, Oh No and Tangerine Dream on board with Woody Jackson, who had collaborated with the team on three previous projects, Red Dead Redemption (2010), L.A. Noire (2011) and Max Payne 3 (2012). In collaboration with each other, the team of producers composed twenty hours of music which scores the game’s missions.

Limited to a production run of under 5,000 units worldwide, these limited editions will be available from December 9 at top online and physical record stores. You can pre-order The Music of Grand Theft Auto V: Limited Edition LP Collection on CD and vinyl right here.