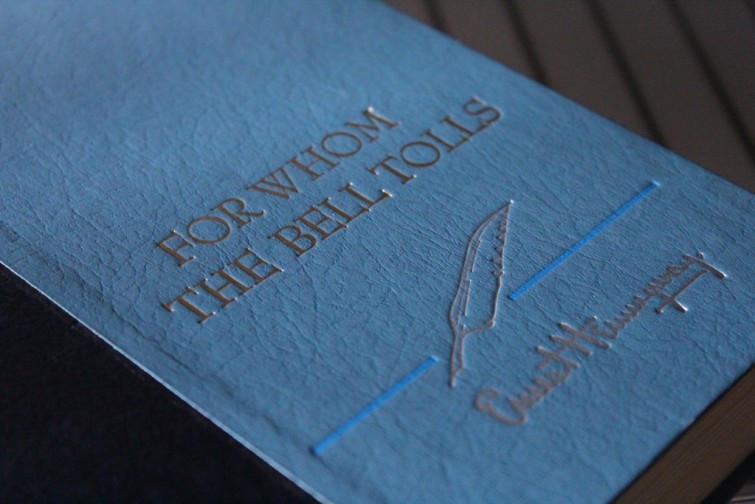 Winning the Nobel Prize in Literature in 1954, few novelists have been as widely celebrated as Ernest Hemingway. He famously avoided complicated syntax. About 70 percent of the sentences are simple sentences– a childlike syntax without subordination. His work, these three works of literature in particular, have stood the test of time.

This is a matching set of three novels: The Sun Also Rises (1954 edition), For Whom The Bell Tolls (1968 edition) and A Farewell To Arms (1957 edition). These books have blue and black leatherette covers. The covers has the novel titles in silver gilt lettering with a feather underneath.

The Sun Also Rises was Hamingway’s first novel, which revolves around a group of American and British expatriates who travel from Paris to the Festival of San Fermín in Pamplona to watch the running of the bulls and the bullfights. In 1926, the New York Times wrote of Hemingway’s first novel, “No amount of analysis can convey the quality of The Sun Also Rises. It is a truly gripping story, told in a lean, hard, athletic narrative prose that puts more literary English to shame.”

Fourteen years later, the author published For Whom the Bell Tolls, which tells the story of Robert Jordan, a young American in the International Brigades attached to arepublican guerrilla unit during the Spanish Civil War. It explores themes of death and suicide, which Hemingway would later commit in 1961.

A Farewell To Arms takes place during the Italian campaign of World War I. A Farewell to Arms is about a love affair between the expatriate American Henry and Catherine Barkley against the backdrop of the First World War, cynical soldiers, fighting and the displacement of populations. It was his first “best seller,” and was later adapted into plays and films.

I found these three editions at my local Goodwill, which has a somewhat random system of organizing and pricing books. I was only passing by the book section when the large-font Hemingway caught my eye. Each books was priced at $2.50, making the set $7.50. In its current condition, it is valued at around $25. As I begin to rebuild my personal book collection, I certainly intend to keep these in my possession.

Initially, I was concerned that this was an incomplete set of a much larger collection. But after some research, I discovered that only these three titles were released in this set– two during Hemingway’s lifetime and one seven years after his passing.

For anyone who is at least moderately interested in the life and work of Ernest Hemingway, consider reading Hemingway’s Cats: An Illustrated Biography, reveals the legendary writer’s affinity for the companion animals he kept throughout his lifetime.