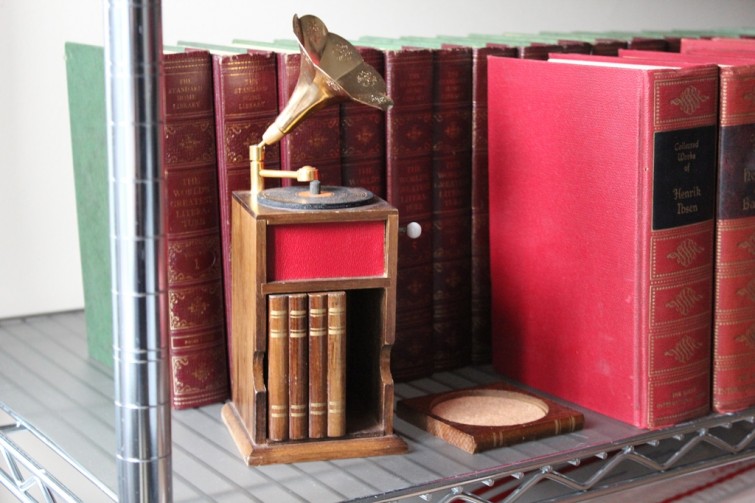 With its vintage charm and functionality, this antique music box is one of my favorite picks of the year. I found this antique music box at a garage sale earlier this year. My fiancee had recently mentioned a need for coasters for our new apartment earlier that week. The seller was beginning to liquidate her antique booth merchandise and was open for negotiations. The price tag said $18, but I was able to nab it for $14.

The music box is shaped like an old-fashioned phonograph. It fits six small quark board coasters, which are made to look like small books in a book shelf. And when you turn the knob on the side, it plays “Raindrops Keep Fallin’ On My Head” is B. J. Thomas.

According to the seller, it appears to be from the mid-1970s. Surprisingly, it still plays remarkably clearly. And all of its parts seem securely intact.

“Raindrops Keep Fallin’ on My Head” is B. J. Thomas’s #1 song, written by Hal David and Burt Bacharach for the 1969 film Butch Cassidy and the Sundance Kid. It won an Academy Award for Best Original Song. It was recorded in seven takes. In the film version of the song, B. J. Thomas had been recovering from laryngitis, which made his voice sound hoarser than in the 7-inch release.

I value this piece at about $25. Since this purchase, we have continued to put the music box to great use. In addition to its coasters being used in various rooms of our apartment, the music box itself makes for a wonderful conversation piece.

And in case you were curious, you can check out how music boxes work right here on this episode of Curiosity Show: