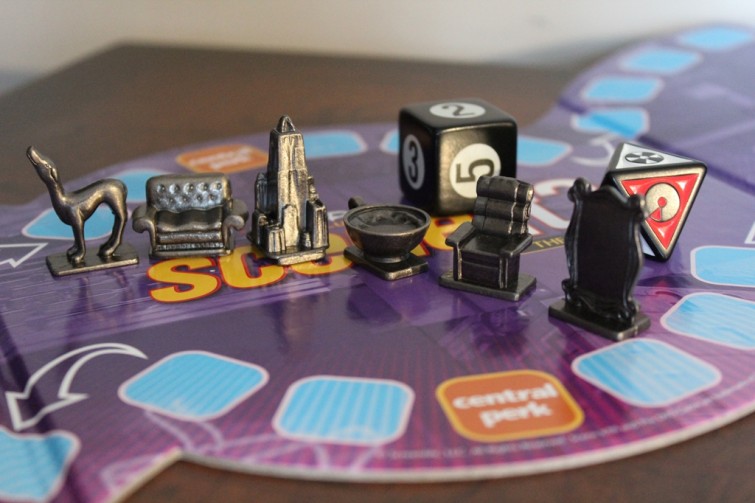 Being a huge fan of Friends since its 1994 television debut. So when I found this complete, like-new copy of Friends-edition Scene It at a garage sale last month for five bucks, I was stoked to take it home and play it with my fiancee, who’s equally enthusiastic about the series.

For those who are already familiar with the Scene-It series of interactive DVD board games, this one is similar. You pop in the DVD, set up the board game and roll two dice. One is for how many tiles you move forward, the other die is for what action or challenge you take– mostly involving Friends trivia. Between 2-6 players can play at one time.

Description from the manufacturer: For fans of the iconic, long-running Friends television show, Scene It? Deluxe Friends Edition is the ultimate party game that includes real TV clips, challenging and entertaining trivia questions and custom Friends puzzlers for hours and hours of endless fun. From foosball matches and hanging out at Central Perk to Marcel and Smelly Cat, you¿ll find all your favorite Friends moments in Scene It? Deluxe Friends Edition. Now you can relive ALL TEN seasons from this hit show, with real show clips, trivia questions and other on-screen puzzlers. How well do you really know Monica, Phoebe and Rachel? Or Chandler, Joey and Ross? You’ll find out as you play the game that celebrates one of the greatest comedy series ever to grace the airwaves.

The details really stand out. Gunther, the show’s coffee shop manager, narrates the game and he does an awesome job. The menu transitions are really smooth and some of the questions are often challenging, even for someone who has seen the show all the way through at least 20 times. Fortunately, the game covers all ten seasons of the show, so there’s a lot of trivia to cover.

The board folds out so that you can play a long version of the game or a short one, although the short version will be VERY short. There are a lot of ways to play. The standard way is a bit cheap in my opinion, as it could allow one player to get lucky and win the game quickly. This is how I recommend playing: roll both dice, do what the action card says to do, if you are successful, move forward according to the six-number die. Then move on to the next player. This version should take about 30-45 minutes to complete depending on how many are playing.

The game pieces are fantastic. Each are made out of a heavy metal, so they have a lot of weight and a lot of detail. The pieces are shaped like: the coffee shop couch, the frame on the apartment door, Joey’s recliner, a coffee shop, Joey and Chandler’s dog statue and part of the NYC skyline (see the main picture).

It’s pretty simple to pick up and play, but before you invite some friends over to play it, I recommend playing it through once by yourself to acclimate yourself with the rules. The game is best played with at least three people who have seen the show all the way through at least once.

Scene It? Deluxe Friends Edition DVD Game is available to order on Amazon.