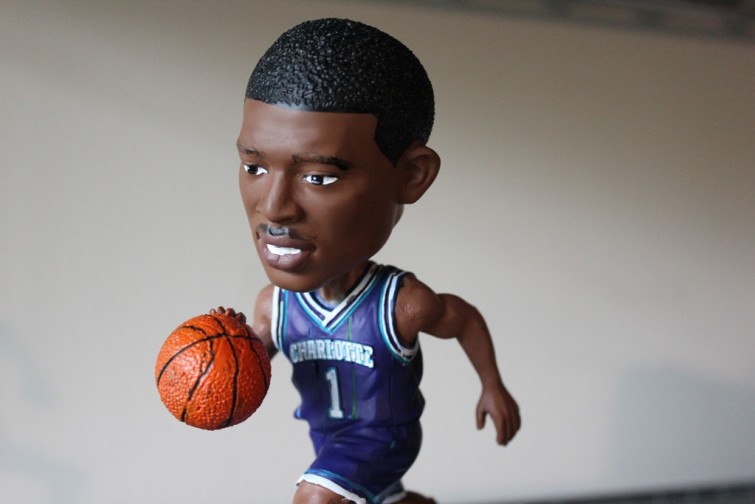 1124
By Barry Falls Jr
5 years ago
In Thrift Picks

Muggsy Bogues has retired from playing basketball for nearly 15 years, but he’s still one of the most iconic, widely-embraced players to come out of the Tar Heel state. That makes finding this awesome bobblehead of the shortest NBA player in history all the cooler.

I found this little guy at a garage sale for 50 cents. It was made in China and produced by Match Up Promotions, a product branding and promotional company in Longwood Florida. Based on previous eBay sales, it’s value is somewhere between $60 and $75.

Muggsy had a career playing basketball for about 14 years. But he’s best known for his time with the Charlotte Hornets, where he played from 1988 to 1998. The Miami Heat and Charlotte Hornets were set to enter the NBA for the 1988–89 NBA season. On June 22, 1988 the Hornets selected Muggsy in the expansion draft. As Bogues settled in Charlotte, he established himself as an exceptional passer, a great stealer and one of the fastest players on the court.

As a short kid who lived in the Charlotte region, Muggsy was my idol. One of my favorite childhood memories associated with the 5 foot, 3 inch star was his role in 1996’s Space Jam, where he gets his basketball talents stolen by a very short alien. I probably didn’t catch a lot of the references in the Loony Toon’s-NBA mashup as a kid. But even today, that movie holds up as one of the best basketball movies I’ve seen.

For anyone interested in learning more about Muggsy’s experience growing up in inner-city Baltimore and achieving success in the NBA, be sure to check out his autobiography–  In the Land of Giants. Even for those who aren’t particularly big basketball fans, this book is really inspirational– especially regarding his struggles with poverty and prejudice.