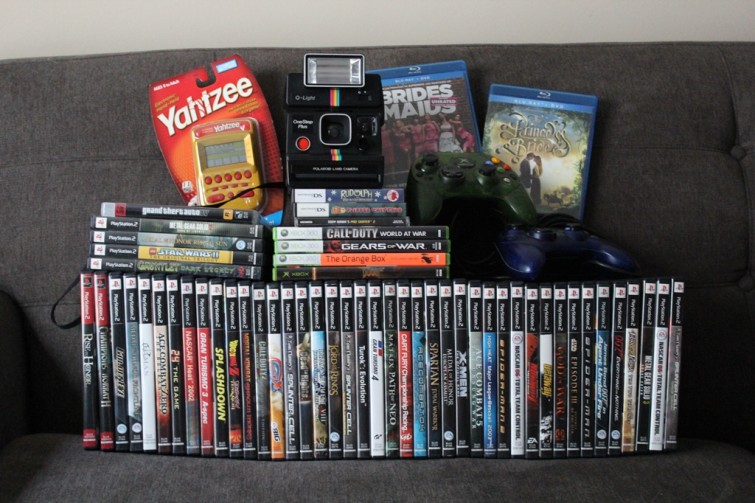 2793
By Barry Falls Jr
8 years ago
In Thrift Picks

This is the second time this year that I brought my fiancee with me picking in light rain. And unlike last week’s mostly disappointing haul, I finally found a ton of great stuff with a lot of variety. I found a lot to resell, a lot to keep and a lot to trade.

This Saturday’s garage sale finds are a testament to what you can find if you don’t call it quits after only a few hours of picking. We mapped out eight yard sales that stretched across three city borders, assuming that we’d find sales in between. The first sale on my list mentioned games on their listing, so I planned to go there first and even skipped a few sales on the way there.

It turns out, the sale was probably cancelled due to the rain. So we continued to backtrack to several yard sales, where we found little picks here and there. After about an hour and a half, we hit our last yard sale where we found the best finds of the day, then headed to thrift stores, where we found even more cool stuff. 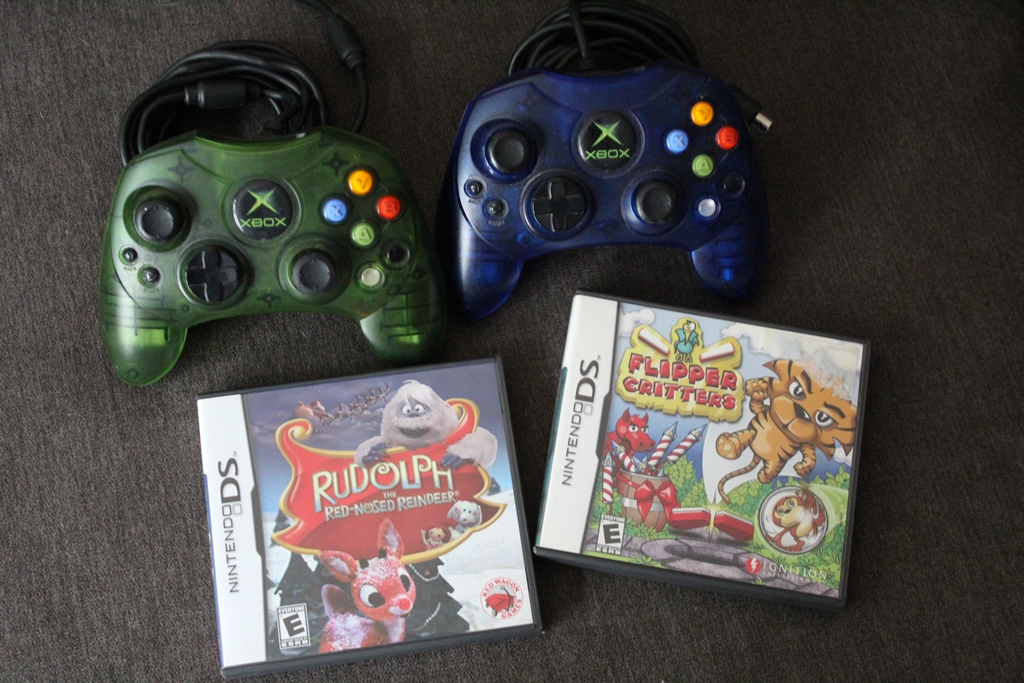 This was the first sale of the day. We found this at a yard sale that was mostly in a lady’s living room. There was a kid there who looked about 7 years old, so I was mostly on the look out for DS or Wii games. The lady said 50 cents per game plus a buck for the XBOX controllers. I usually would leave the controllers alone, but these were cool colors. So I paid the $2 and went on to the next sale.

I’ve had a difficult time deciding where the line is between collecting games and hoarding them. I looked at these two DS games later that evening when I got off work and decided that I’d never play them nor would I gain any sort of satisfaction in having it on my shelf. So I added everything here to my sell/trade pile. 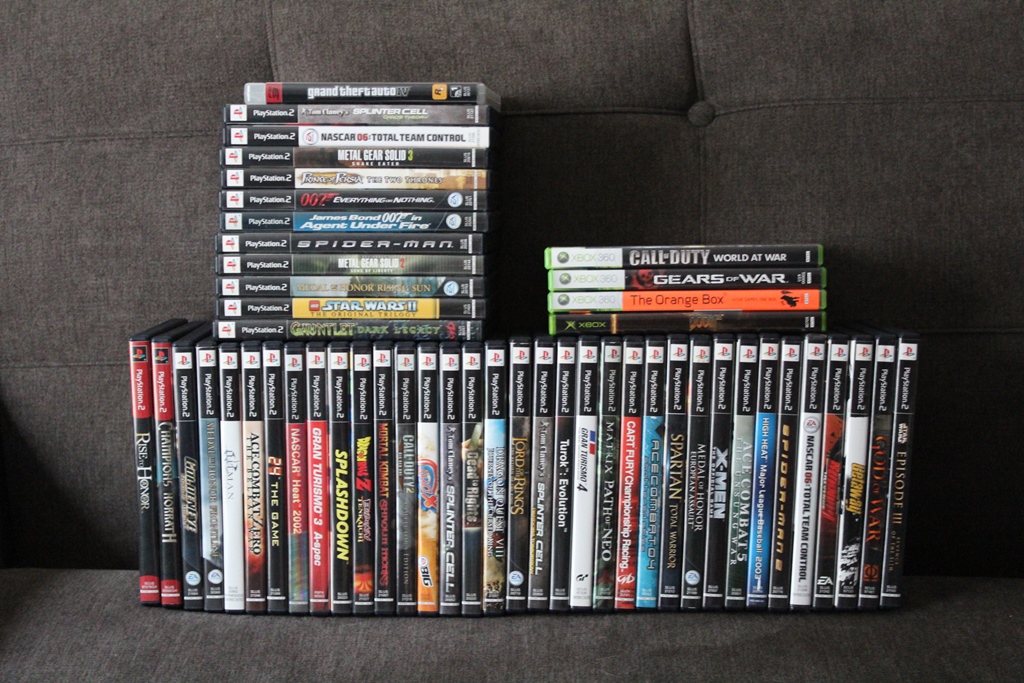 We found absolutely nothing between the first garage sale of the day and this. So we were pretty close to giving up and going home. This final sale was from a teacher who was retiring and mostly wanted to get rid of her old school supplies.

I saw her listing the day before and noticed two huge boxes of what seemed to be XBOX 360 and PS3 games next to some of her children’s books. But because she included the picture in the listing and the sale lasted from Friday to Saturday, and I was there Saturday, I assumed it would all be gone. But as soon as I walked up, I spotted one buyer picking up a few PS2 games.

There were still two boxes with mostly PS2 games. I figured all of the 360 and PS3 games were sold quickly and she decided to put out older games the next day. The sign said $2 each and I counted 50 games, mostly quality games but nothing more valuable than $15. The seller was super sweet and seemed like she was ready to get rid of all the games. So I asked her if she’d give me a deal if I purchased all of them. She asked for $45, and I accepted.

Only about ten games were sports titles or Greatest Hits games (which I do not collect) or games that I already owned. I added those to my trade pile and took them to a local retro game store the next day, where I traded them for some games that I needed. But I’ll get to that in next week’s yard sale haul entry.

This lot puts my PS2 collection up to 97. I’m most excited to have the original God of War, Dragon Ball Z and the Orange Box. 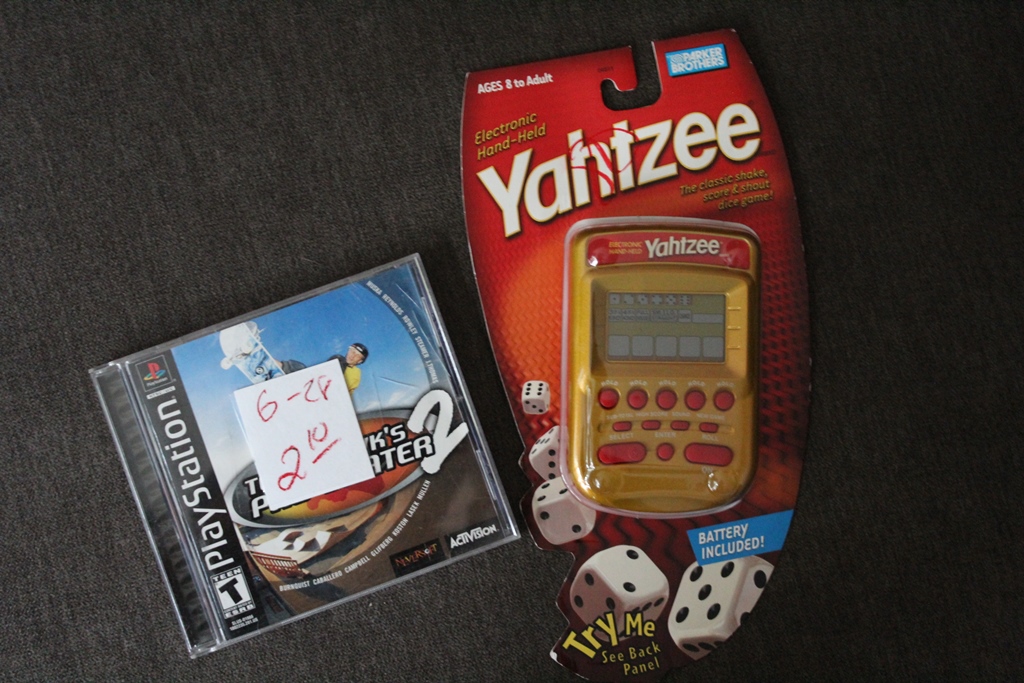 After garage sales, we headed to three or four thrift stores, where we picked up some more great finds. The day was already made with the PS2 haul, so the rest was just icing on the cake. Tony Hawk 2 is probably one of the games I played most as a child, so it’s weird that I didn’t already have it on PS.

Interestingly, when I was a kid, I bought this game and beat it for almost every console it was released on– PC, N64, Dreamcast and Game Boy Advance. $2 doesn’t seem like such a great deal after the previous haul, but it’s definitely a game that everyone should play.

The Yahtzee handheld is one of my favorite picks of the week. It was 80 cents, but I think I should be able to flip it on eBay for $35. For some reason, these do really well on eBay. And this is the first time that I’ve found this version sealed. 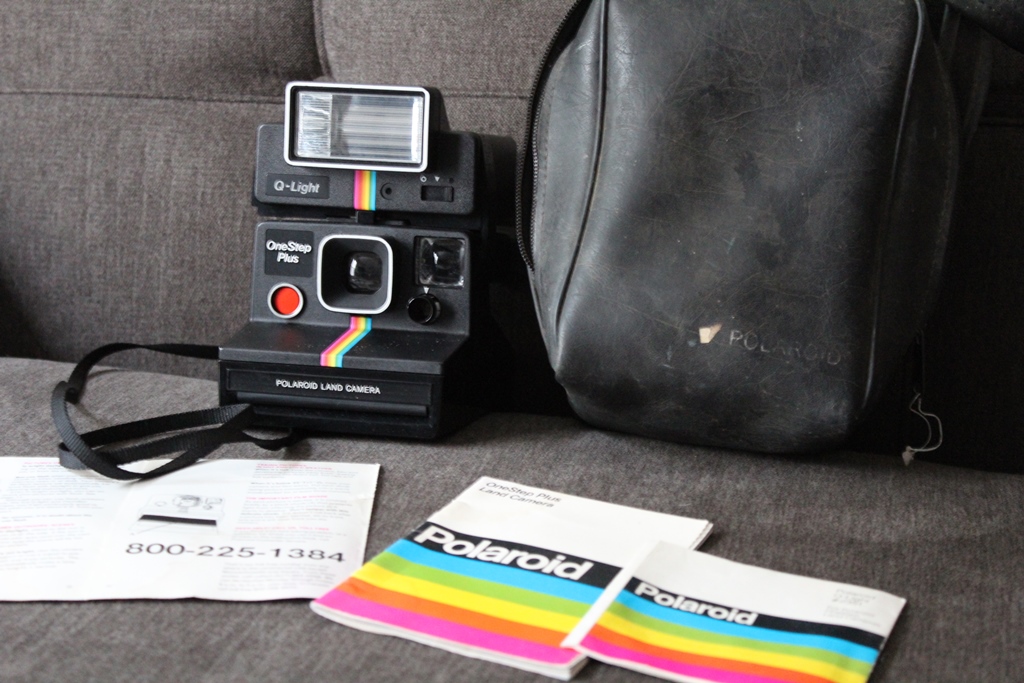 I found this one at the same thrift store. I saw it first in the display case but decided to walk around the store first to see if I could find anything else before I asked how much it was. After picking up the previous two pieces, I went to the cashier and asked how much– $6, but it came with a case and instructions. So I picked it up.

It’s in perfect condition and matches my white rainbow stripe Polaroid camera. So I’ll probably keep them on my shelf together. I’ll probably do a post about this find on a later day. 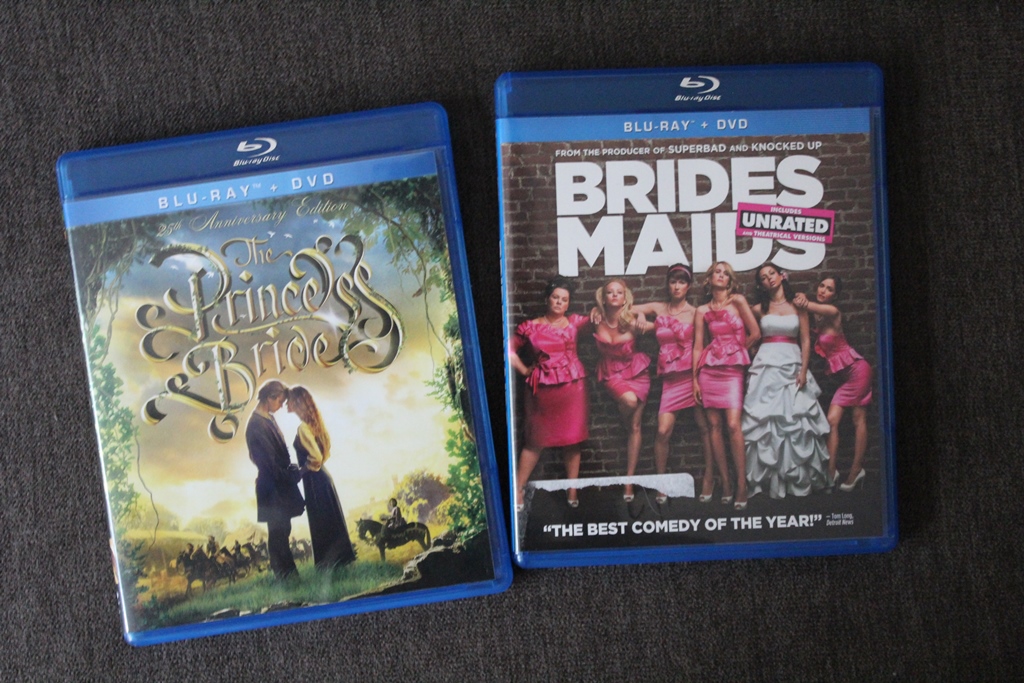 The last place we stopped at was a small pawn shop, which I usually avoid, because the sales people are pushy and ask for a ton of information from you. The lines are usually longer so you’re also there longer. But I wanted to check to see what kind of digital camcorders they had, because my fiancee and I wanted to begin filming a documentary soon.

No luck on a good camcorder, but we did find two of our favorite comedies for $5 for Brides Maids and $3 for Princess Bride, which was a great way to end the day.


Can you truly appreciate a video game without playing it?