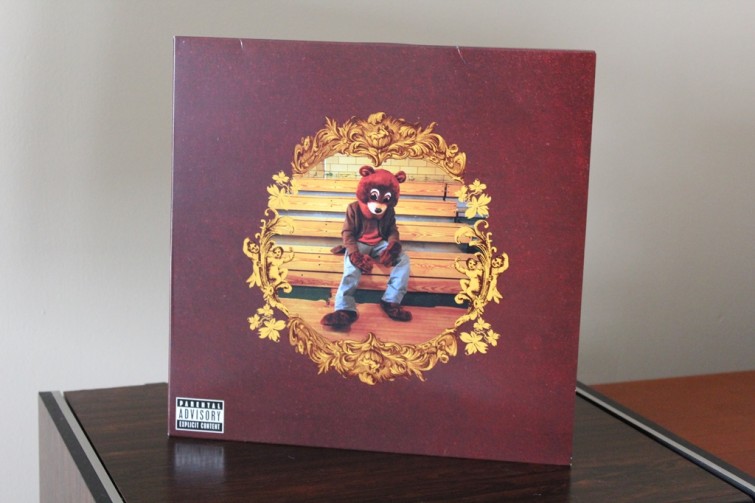 BETWEEN THE GROOVES: Kanye West’s “The College Dropout”

The College Dropout was released February 10, 2004, on Roc-A-Fella Records. At the time, the hip hop genre was dominated by rappers who weren’t gansters rapping about being gangsters. Kanye’s contribution of themes like race, family, self-consciousness and faith brought a much needed surge of humanity to the equation.

As the title suggests, the album is loosely structured around Kanye’s decision to drop out of college and the societal pressures linked to education, occupation and socioeconomic status– most evidently in “All Falls Down.” In this track, Kanye describes the great lengths that people, especially those in the black community, go to to project wealth to quell their own insecurities. Sometimes, Kanye suggests, that means pursuing a college degree that won’t benefit them.

“We’ll buy a lot of clothes when we don’t really need em/ things we buy to cover up what’s inside,” Kanye says in “All Falls Down.”

Perhaps “Jesus Walks” remains as the most compelling testament to Kanye’s determination to be authentic with the way that he pours himself into his music.

The song, which is told from the perspective of a drug dealer contemplating his relationship with God, also explores Kanye’s disgust with the mainstream media’s fascination with sex, drugs and violence. He rhymes, “So here go my single, dog, radio needs this/They say you can rap about anything except for Jesus/That means guns, sex, lies, video tapes/But if I talk about God my record won’t get played, huh?”

According to West, these lines were inspired his experience pitching “Jesus Walks” to producers who rejected him for not conforming to the lyrical stereotypes of other rap artists. Upon release, the song was praised for its compelling sonic atmosphere and boldness in its open embrace of faith and was awarded a Grammy for best rap song.

The College Dropout feels autobiographical from start to finish. The album tells a story in the rapper’s very unique and very candid brand of lyricism. Ultimately, Kanye uses The College Dropout as a musically progressive and hugely accessible platform for self-examination.

Check out the music video for “Jesus Walks” right here: