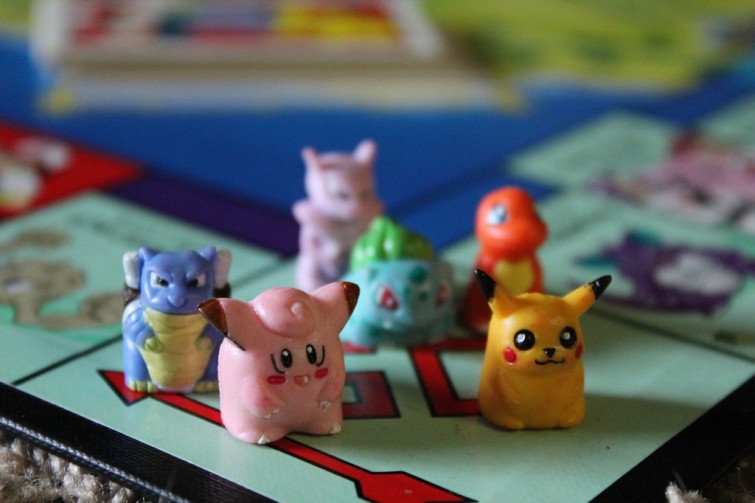 Last week, I stumbled upon this highly collectible Pokemon-edition Monopoly board at a local Goodwill for a couple bucks and excitedly took it home to find that it was 100 percent complete and in mint condition. This board was released in 1995 during the early Pokemon craze, so it features the monsters, characters and locations of the original Kanto series (Indigo League in the anime).

Since everyone knows what Monopoly is, I won’t explain the rules. This is essentially the same game. Except instead of purchasing properties, you catch Pokemon. So this edition neither diminishes or improves upon the familiar Monopoly formula.

The detail that went into producing this board is fantastic. The board is nice and colorful, and the little character pieces (Pikachu, Charmander, Bulbasaur, Blastoise, Clefairy and Mewtwo) look great, even though they’re made out of plastic instead of metal. The cards feature familiar characters, and the board, which is almost 20 years old, has aged extremely well.

Personally, I feel like many Monopoly special edition boards are poorly and inconsistently produced. I prefer when the special edition boards follow thematic rules– such as properties being replaced by similar developments. I feel like this edition lacks some of that consistency. But for the most part, it contains enough fun references to excite fans and collectors. Here’s what the board looks like. 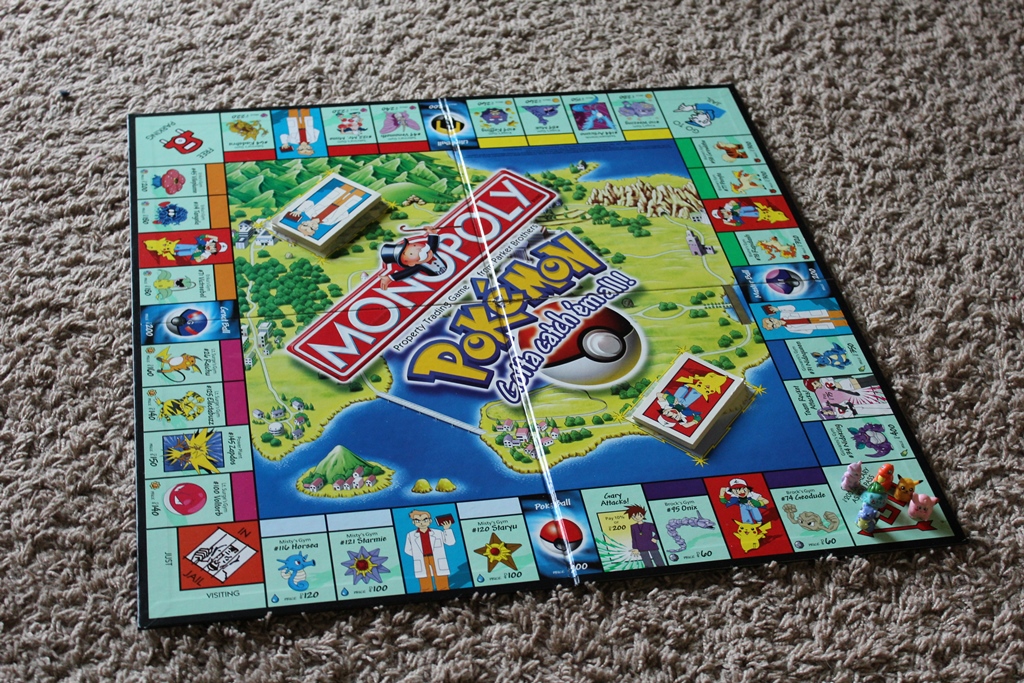 As you can see, the properties are replaced by Pokemon. This makes sense, because the objective of the Pokemon franchise (the games, the anime and so on) are to “catch ’em all.” Initially, I thought that their placement seemed a bit random. I figured the Baltic Avenue and Mediterranean Avenue would be replaced with weak Pokemon such as Caterpie and Weedle and that Boardwalk and Park Place would be replaced with powerful Pokemon like Gyarados and Dragonite.

But then I realized that each property represented one of the eight gym leader in the Kanto region:

The “railroads” are Poke Ball, Great Ball, Ultra Ball, and Master Ball. The four corner spaces: Pass Go, Jail, Free Parking and Go to Jail are all unchanged. It might have been cool to see Officer Jenny as the police officer with Team Rocket in the jail. This (combined with the plastic pieces) just seemed a little lazy and cheap.

But overall, this is an awesome piece for any Pokemon fan. The design isn’t always consistent, but this Monopoly edition should provide hours of fun for fans of the classic “Fast-Dealing Property Trading Game.”

In 2014, USAopoly released MONOPOLY: Pokemon Kanto Edition, which fixed a few issues (the pieces are made of metal and are contain more recognizable characters). Since it’s newer, this version is cheaper than the original 1995 version. Once I acquire that version, I’ll be sure to post a review.