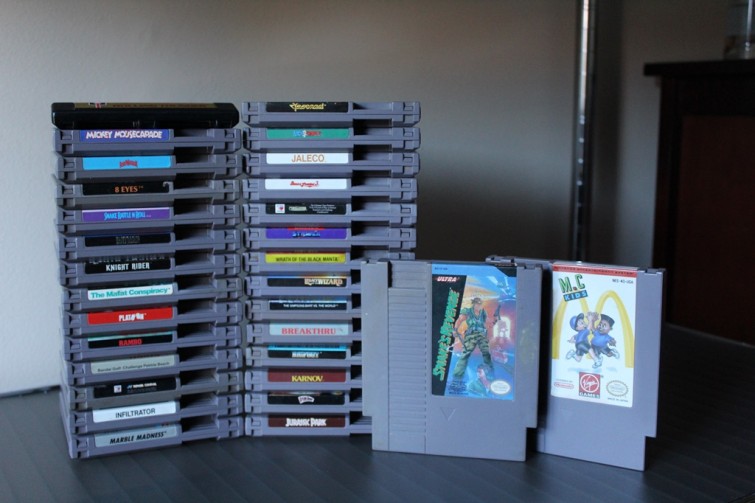 This pick-up took to planning and strategy. I keep a folder on my laptop that contains a link to all of the Facebook pages and company websites of the game stores around my city and any of the cities that I sometimes frequent. That way, I can take advantage of any big sales or trade specials going on.

One particular store was a bit of a drive away from me, but they were having a weekend-long buy-one-get-one-free sale on all NES games. This particular store must be located in a city with players who are mostly interested in current-generation games, because they always seem to be overstocked with NES games. So I felt like it was the perfect opportunity to liquidate my trade pile and knock out a big chunk of common NES games.

First, I spent a couple days gathering all of the games in my trade pile into to large bags. Then when the weekend came around, I took a drive to the retro game store, traded in my entire trade pile for $100 and spent an hour sifting through their NES shelves to pick out $200 worth of NES games to take full advantage of the BOGO free sale.

I had a little bit of extra cash in case I didn’t have enough trade credit to get the games that I needed. But they ended up having almost exactly $200 worth of games from my wanted list, as this particular store sells many of their rarer games on their eBay store. Most of the games are pretty common:

After looking at my game list, I realized that I already had M.C. Kids. So that one will be going back into the trade pile. This knocked off about 4 percent of the complete NES collection. This haul brings my collection from 156 to 185 loose NES games (including 29 licensed titles and one unlicensed TENGEN game). For the rest of the entries of NES Quest, check them out right here on Retro Chronicle.