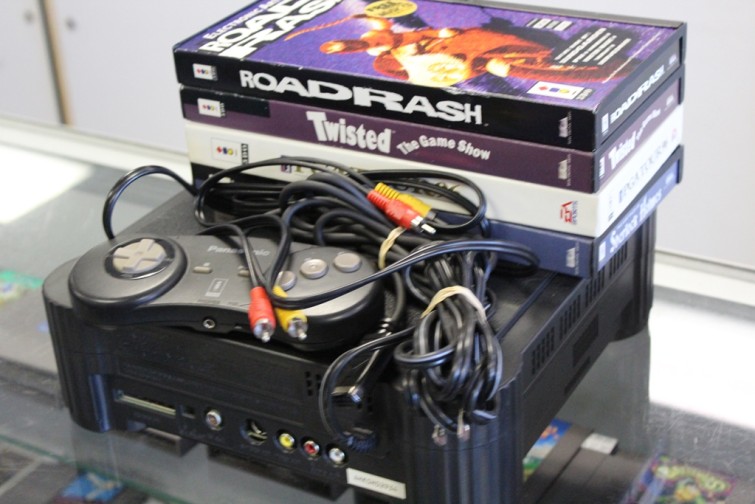 Collecting tip #13: Trimming the fat from your collection (part 2)

1101
By Barry Falls Jr
6 years ago
In Collecting Tips

So I decided to take a weekend trip to a friend’s place about 5 hours away. The last time I was in the area, I discovered a retro game store that had a great selection, fair prices and a great trade policy that allowed for 50 percent trade value on all items that you bring in. I decided to to use the trip as an opportunity to turn all of my unwanted games into wanted games.

Of course, those who have been keeping up with NES QUEST know that my primary collecting focus has been on loose NES games, so that’s what I decided to focus on during this trip as well. Due to my limited space in my apartment, my retro game collection is in a relative’s storage garage. So I spent about two hours there analyzing every corner of my collection for stuff to get rid of.

A lot of thought went into what games I’d get rid of– even months before I decided to finally part with them. After careful analysis, I ultimately found that everything that I wanted to get rid of fell into a handful of categories:

Games from consoles that I never really wanted. I’ll start with this one, because it encompasses most of the games that I purged this year. I had recently purchased three flashback consoles earlier this year (Intellivision, Colecovision and Atari). Each console included almost every game that I’d want to play and the quality of the consoles was good enough to make me decide to part with every Intellivision, Colecovision and Atari game, console and accessory that I owned.

Of course, I’ll admit that I never really had much affection for those consoles to begin with. Atari 2600 was my first console that I owned, but it was the NES that made me love games. Flashback consoles have improved greatly over the years in terms of quality and retaining the spirit of the original. But they’ll never replace my Nintendo or Sega consoles.

In addition to those three consoles, three other consoles also made the list of games to completely abandon: 3DO, PSP and Sega Master System. The 3DO is a really neat console that has and will continue to go up in value. But I’ve literally never found a game for it that I enjoyed. That might be because I’ve only found less than five games in the last three years that I’ve owned it.

The PSP and Sega Master System fall into similar categories. Yes, there are good games for both of them. But it’s just not worth the space. I had maybe ten games for both consoles, so I wasn’t too sad to let them go.

Filler games was another big collection of games that I had to let go. The Wii, Playstation 1, 2 and 3 and the XBOX had a lot of great games that I still love. But I found that I didn’t really have any real connection to those console on a collectible level. So I basically got rid of about half of my Playstation and XBOX collection– letting go of all the games that I’d never played and don’t care to own.

Duplicates was a much smaller stack. But there were quite a few in this load. Usually, I do a pretty good job of keeping duplicates separated and either trade them or sell them as quickly as I get them. But I had been a bit overwhelmed with work and school that the duplicates just sort of began crowding my collection. So I was very happy to get rid of all the duplicates that I had.

Some pictures of the items that I decided to part with on the counter of the retro game store: 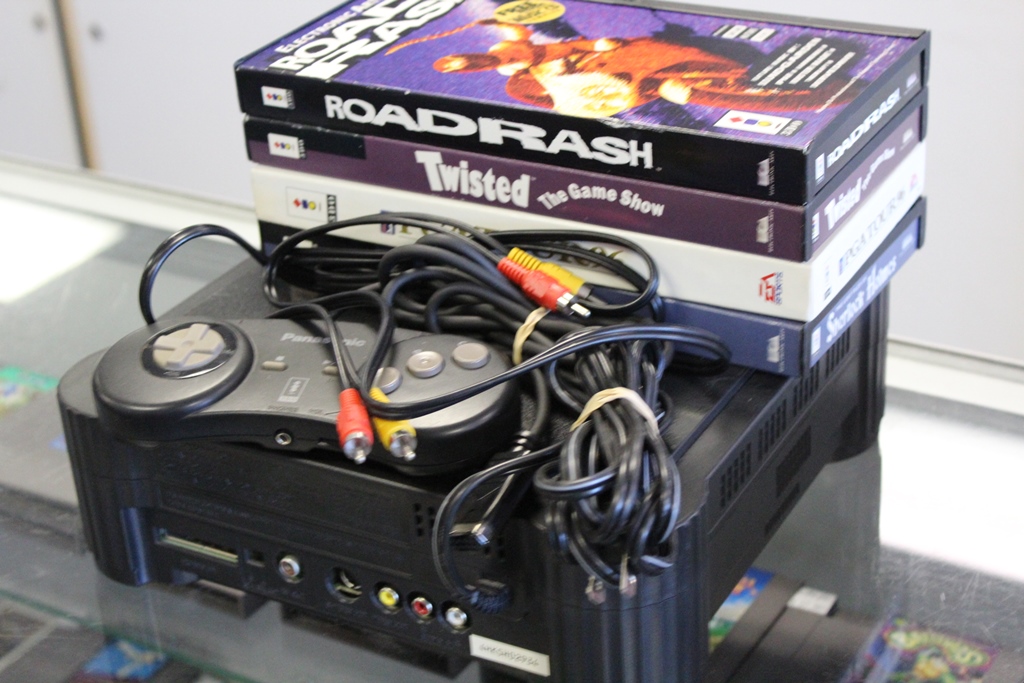 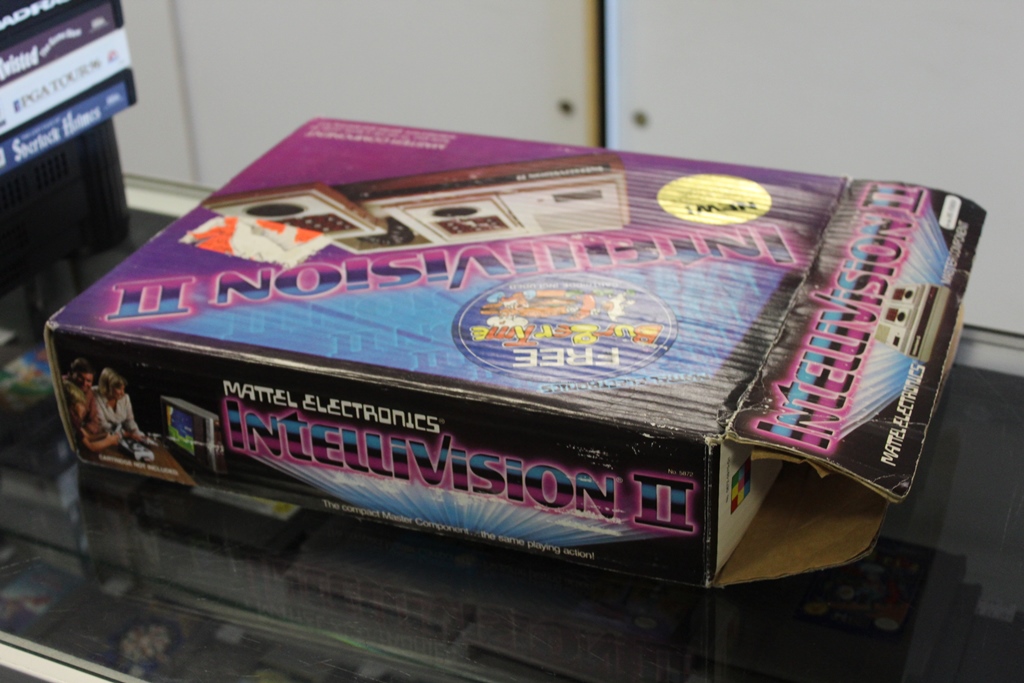 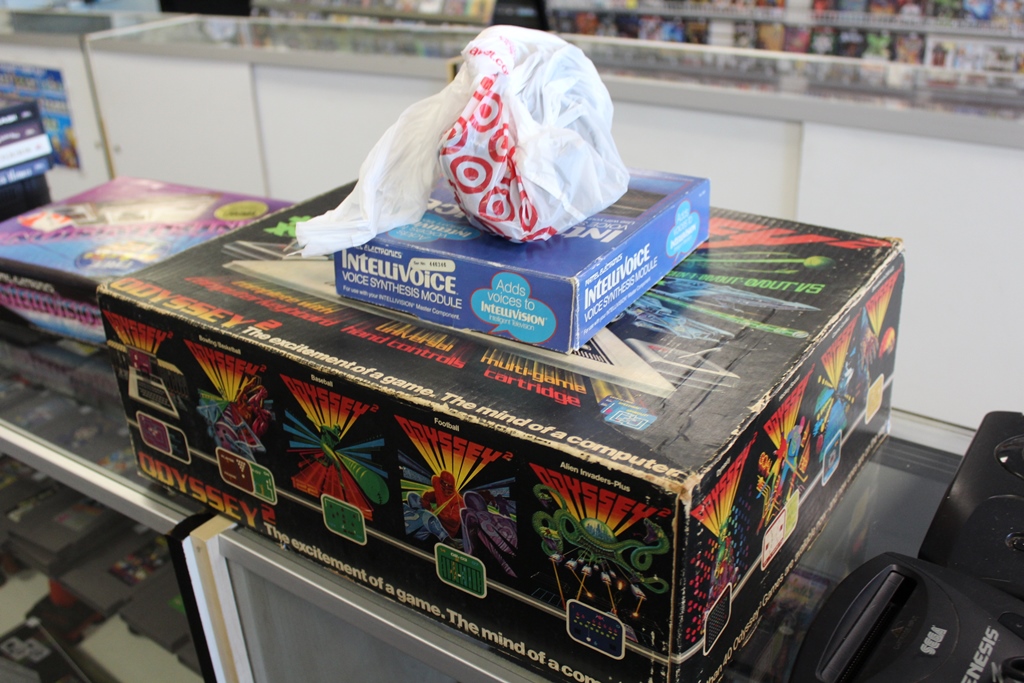 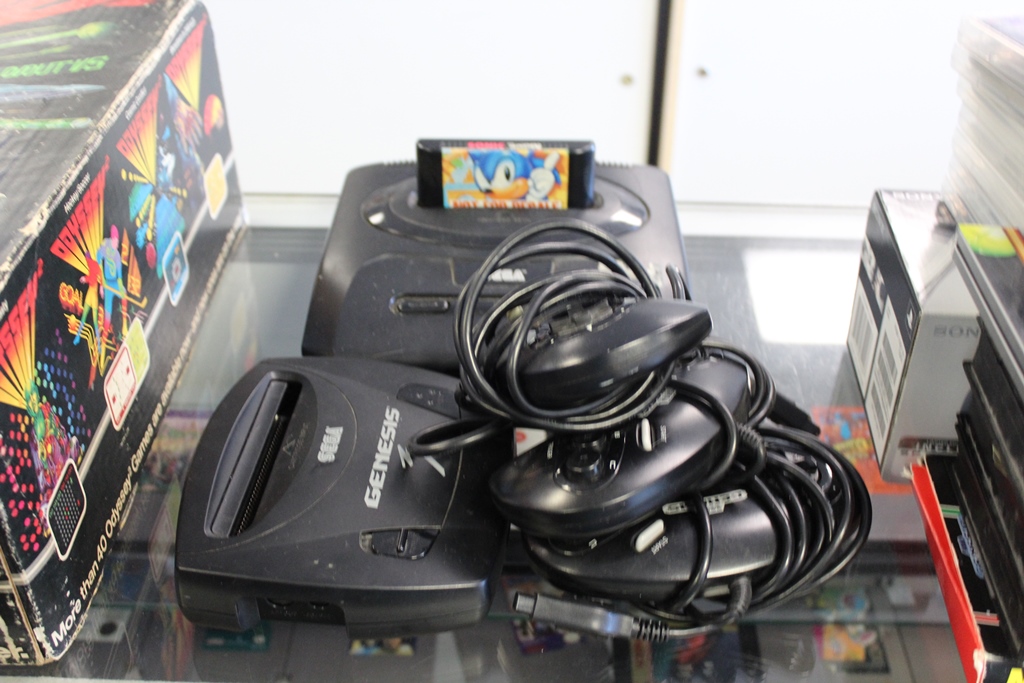 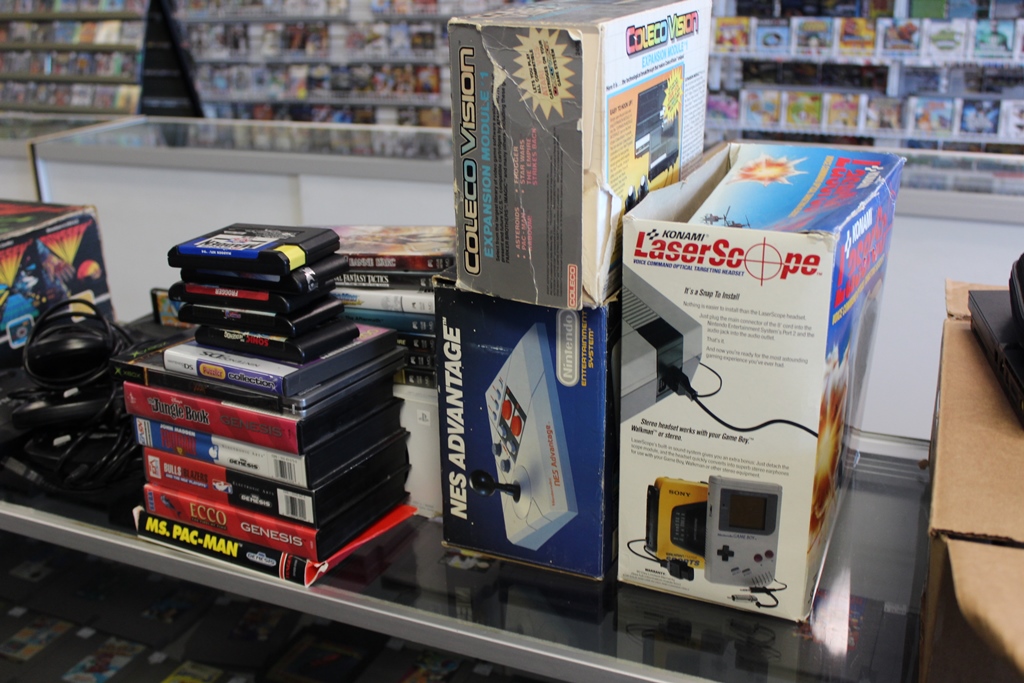 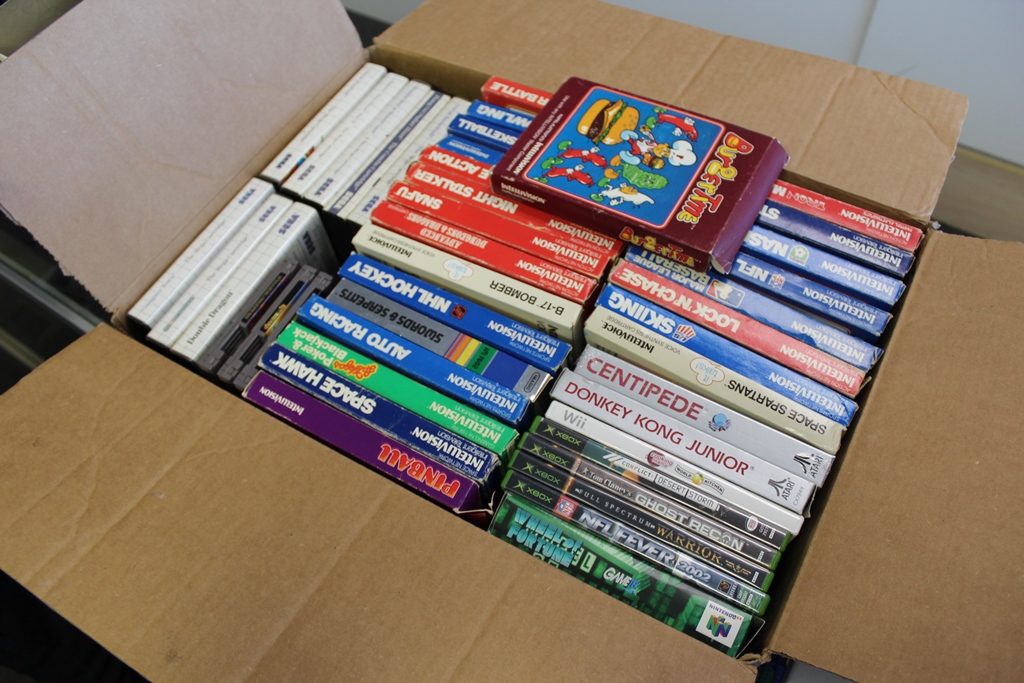 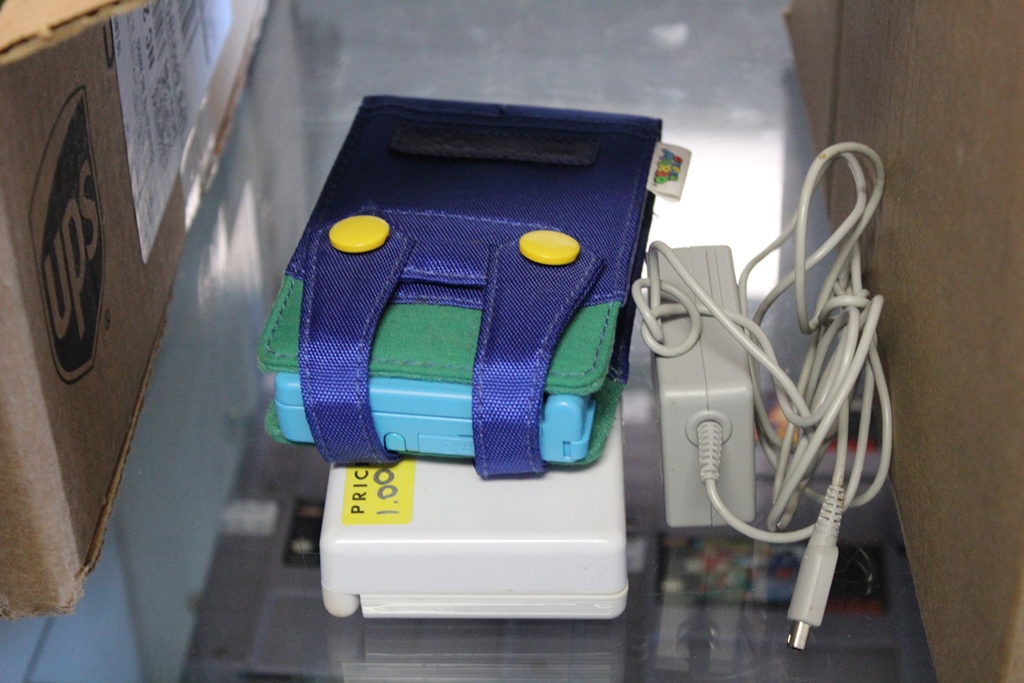 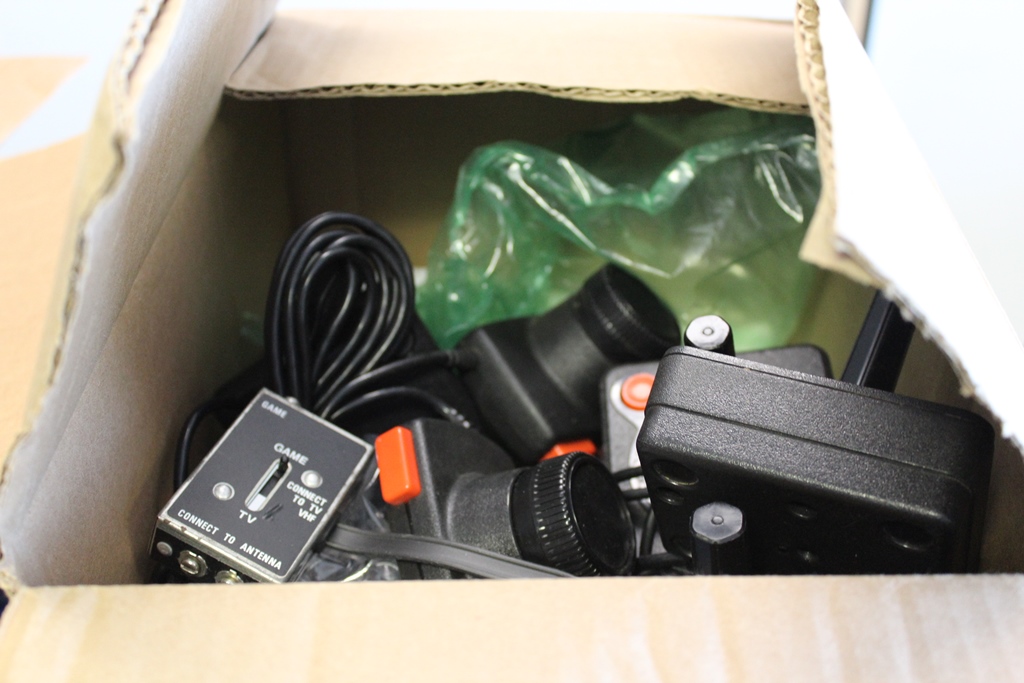 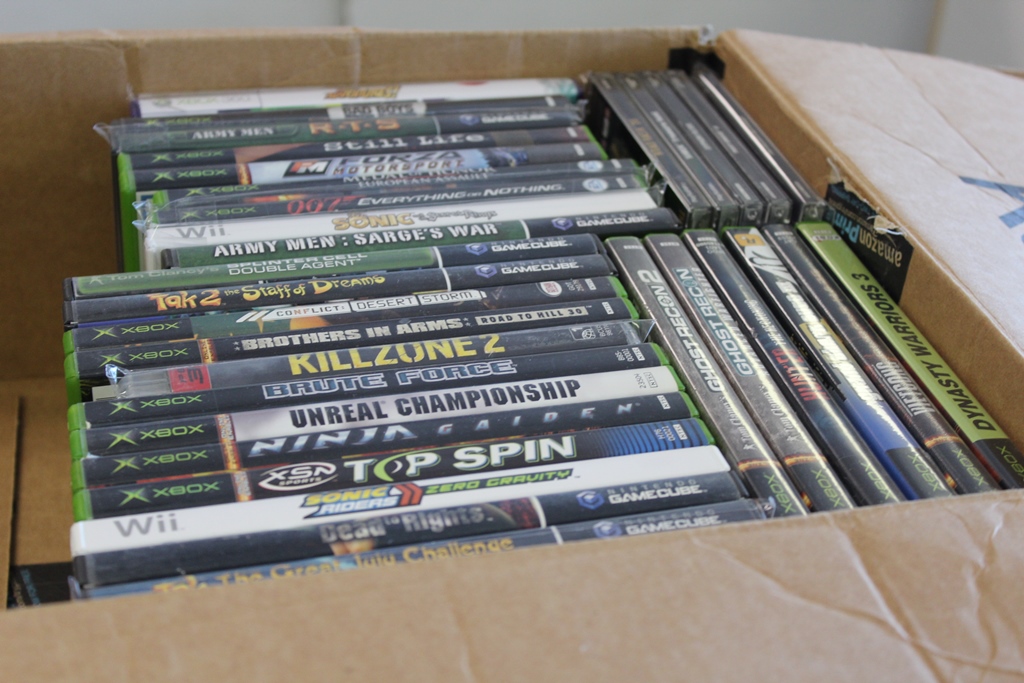 I had no idea how much all these games were worth. I really just wanted them out of my storage space, so I hadn’t even considered how much they’d be worth. I made sure to carefully-package them so that they weren’t damaged in the move– filling up the entire trunk and back seats of the Mini Cooper that I rented for the trip. I made sure I was super friendly to the shop owner, especially since I was dealing with a trade this big.

While they were testing and calculating the value of the lot, I continued making small talk with the employees there. I told them that I came from Charlotte and was visiting friends in the area and that I figured I’d bring these games to trade. I also said that I’m primarily looking for NES games and showed them a printed list of my entire NES collection. I usually just keep the list for reference on my phone, but this time I knew I needed a paper copy.

By time they mentioned that I’d have over $500 in credit, I had already gathered $200 worth of NES games from my list. At that point, I took a quick walk around the store to check to see if there were any non-NES items that I might would want. I spotted the Metroid Prime Trilogy steelbook set for $50 and a blu ray copy of Birdman for $10. I picked both of those up and headed back to the NES section.

At that point, I kept calculating over and over how much credit I had left. The goal was to use the rest entirely on NES games, which is exactly what I did. I found a dozen more NES games before I realized that I had gathered every NES game in the display case that I didn’t have. I had about $25 worth of credit left and picked up a copy of Seaman on Dreamcast and a couple other blu ray movies. 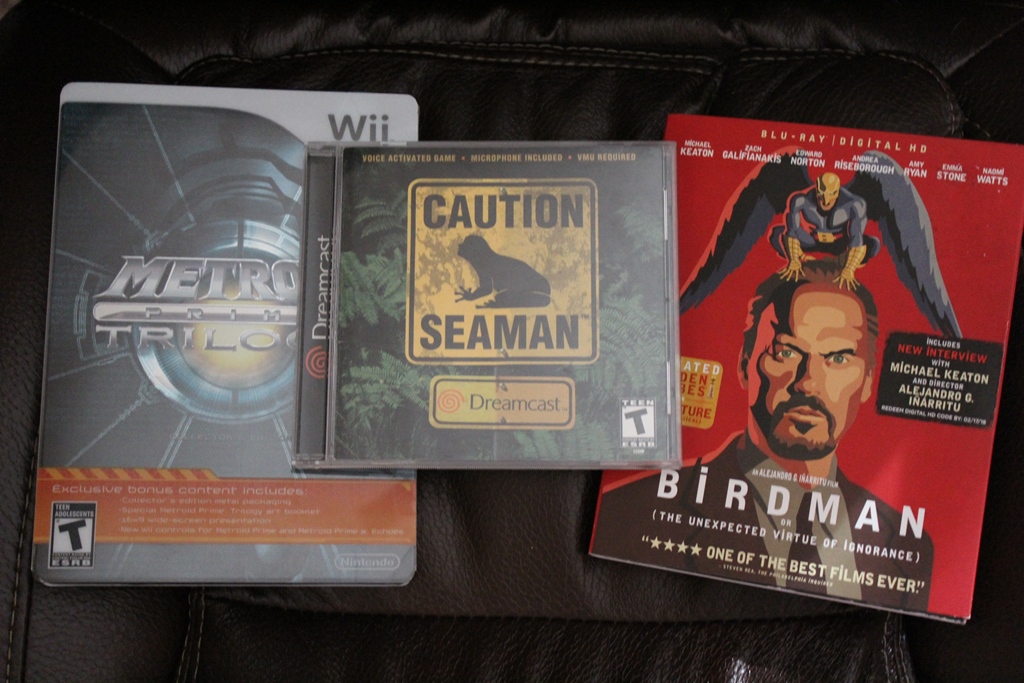 In the end, I used about $100 on non-NES goodies and $400 on NES games that I needed. This was one of my very favorite collecting experiences in a long time. I collected Intellivision, Colecovision, PSP, Sega Master System, 3DO and Atari, but it wasn’t never very satisfying. What I ended up with was a bunch of games that I didn’t really want. I got hung up with on the hoarding mentality that parts of collecting was no longer enjoyable.

So being able to take eight boxes full of clutter and turn them into games that I wanted was incredible– especially since I was able to add 22 NES games to my collection. I’ll talk more about that experience in the next NES Quest.

Collecting tip #13: Trimming the fat from your collection (part 1)