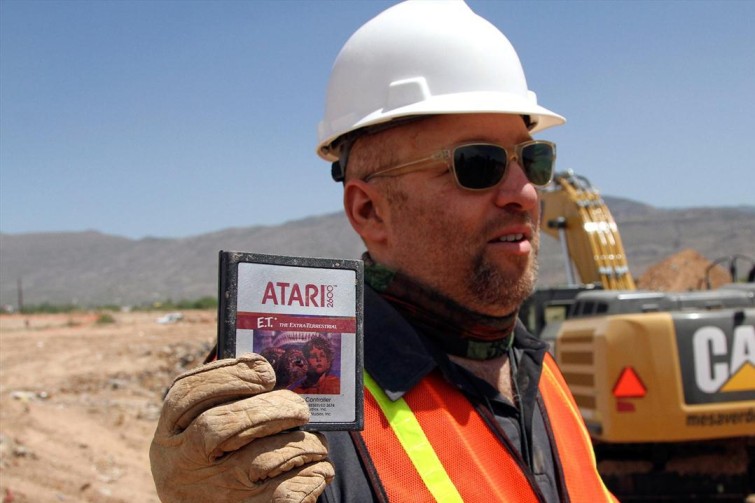 What’s the worst game of all time? If you ask many gamers, they’d say E.T. even though very few of them have probably ever played it. Probably because in 1983, many copies were destroyed in a mass burial of unsold video game cartridges, consoles, and computers in a New Mexico landfill site. That was the focus on the 2014 documentary– Atari: Game Over, which was an XBOX original.

Since the burial was first reported in the press, there have been doubts as to its veracity and scope, leading to a minority considering it an urban legend. I remember as a kid just assuming that it was all a myth– a game so bad it had to be buried by the truck-load. Many (unfairly) credit the game for single-handedly lead to the North American video game crash of 1983.

“Game Over” was directed by Zak Penn, who wrote and directed “Incident at Loch Ness” and “The Grand,” and co-wrote the script for “X-Men: The Last Stand” and the story for “The Avengers.” Penn’s casual, sometime vulgar personality adds a lot of character to the documentary. He acknowledges the silliness of the film’s premise and doesn’t take it too seriously, which makes the documentary really easy to enjoy.

In the film’s first act, he breaks down E.T.’s history and its gameplay. With a lot of hyperbole spreading around in the gaming and collecting community, most people probably didn’t really know how it all went down. Penn does a great job of putting everything into context– the amount of time that the game was developed, Steven Spielberg’s approval of the game, Howard Scott Warshaw’s tainted legacy in the gaming world (despite previously developing the acclaimed Atari classic– Yars’ Revenge), and the fact that home video game consoles were a relatively new industry at the time.

The documentary does a fantastic job at building suspense and intrigue. Even though I knew what actually happened during the excavation of the landfill, it was still a lot of fun to watch the anticipation build for all of the visitors of the excavation site who were experiencing gaming history first-hand.

Ultimately, “Game Over” is a documentary made for gaming nerds by gaming nerds. It’s fun; it’s suitably short (66 minutes); it debunks all the garbage that has become associated with E.T. the video game and the gaming industry. And it’s a must-have for any gaming historian, gamer or collector.

You can order a DVD copy of Atari: Game Over right here on Amazon. The documentary DVD is manufactured on demand using DVD-R recordable media.