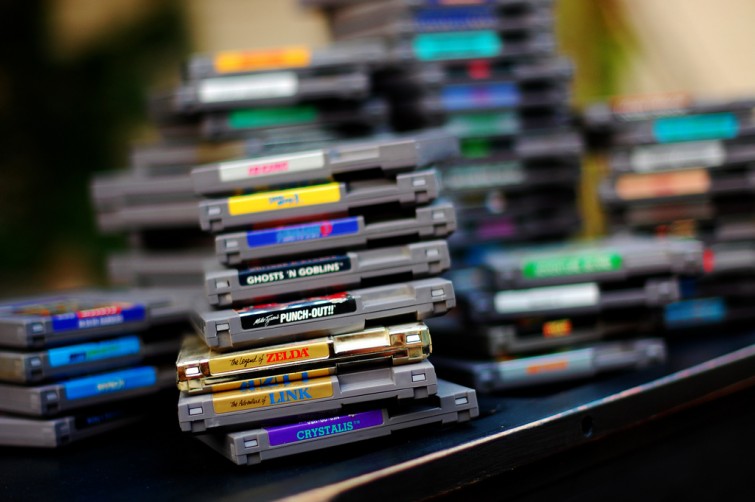 NES QUEST pt.7: To collect unlicensed, or not

So I consulted a handful of online forums to seek out the opinion of more experienced NES collectors to hear their take on collecting unlicensed, so that I’ll be able to use their perspectives as a basis for my own strategy. This is the advice they had to offer me:

“I go mostly for licensed but since the cheapest licensed one I need is almost $100 I started focusing more on unlicensed. It just depends on if you want a complete US released set or not! They kinda ruin the look of a licensed set though.”
-palewhiteboy, Instagram user

“As your collection grows you will probably take an interest in games outside of the licensed set. I would recommend picking up anything you find that’s interesting.”
-nes_pimp, Nintendo Age user

“It depend how you approach the hunt. I buy anything that strikes my interest for the right price. I buy in bulk mostly from yardsale and thrift stores. When I get to the stage where I have a hard time finding things I don’t own, I’ll get back to you. My approach would be buy all nes games and decide for my self if I want a more specific focus when it comes time to track the last bits down.”
-zucc0, Reddit user

“You have a long way to go. Pick up a few cheap and see if it’s for you. If you don’t at least buy Micro Machines, you’re missing out.”
-quiet451, Nintendo Age user

“The more games you get, you’ll probably have more interest in unlicensed stuff. If you’re hesitant about it now, then don’t necessarily go after them. But definitely hold onto them if you get them thrown in when you buy bulk lots or if you see them for cheap at a thrift store.”
-pujolsfan, Nintendo Age user

“I originally set out to go for licensed only, but as my collection grew I started picking up unlicensed games for cheap whenever I found them. I definitely prioritize the licensed games (for example I won’t be buying Panesians etc until licensed is complete) but there are some fun unlicensed games out there. Also are you collecting for the sake of collecting, or do you play/plan on playing a large majority of the libary? If you’re just doing it to collect I’d say why bother getting more games that you don’t plan on playing.”
-DoctorNick, Nintendo Age user

“I can’t imagine trying to collect every unlicensed game. Stuff like Huge Insect, there’s probably only 30 of those in the world, and the people that have it aren’t letting it go.”
-rediring, Reddit user

“I started in the 90’s just collecting any different NES game I could, collection now 500+, realized in the meantime I never cared to bother finishing it and took an interest into Bungs Grey Market equipment and now I like those more than any of my Licenced stuff. Interests change over time.”
-Abstract3000, Nintendo Age user

“I entirely ignore someone who claims to collect NES but doesn’t count the unlicensed games. They are not to be taken seriously.”
-pegboy, Nintendo Age user

“I like unlicensed games and accessories mainly because they’re weird. I tend to pick up any if their fairly cheap and if I don’t have them. I have tended to go for specific unlicensed games (baby boomer and chiller at the moment). They are kind of up to you if you want to collect them. I like them because I find them as an interesting piece of gaming history.”
-etwelty, Instagram users

“Unlicensed games are the same as licensed games for me. Some are worth having only because of their quirkiness, like Operation Secret Storm or Chiller (and other such games that Nintendo would never have licensed). If you want one of these go with Death Race. This game is awesome.”
-Vectrex280996, Nintendo Age user

A friend recently spotted my copy of Master Chu and the Drunkard Hu, which he needed. I hadn’t decided whether or not to go for unlicensed games. But even if I wanted a complete unlicensed collection, I still would have sent it to him, because he’s a great guy and he would have been able to appreciate it much more than me. But it also got me thinking about developing a focused strategy for unlicensed games.

This brings me here– what is my current approach to collecting unlicensed, now that I’ve heard the opinions from so many other NES collectors? My strategy is a mixture of all of the advice above, most of which was getting at the same idea. I won’t go out of my way to find unlicensed games, nor will I ever pay market value. But I will continue to pick them up whenever I find them in the wild.

I’ll continue to include them in game hauls in this series and add them to the total game count, included at the end of every NES Quest post. Both on my shelf and in my database, I will separate all unlicensed games from licensed games. My priority will be to collect licensed games. And when that’s complete or near complete, I’ll have the perspective to say whether or not I want to go for a complete unlicensed set as well.

Featured image by Max Williams. By letting my copy of Master Chu and the Drunkard Hu to my friend, my NES collection dropped from 120 to 119. For the rest of the entries of NES Quest, check them out right here on Retro Chronicle.