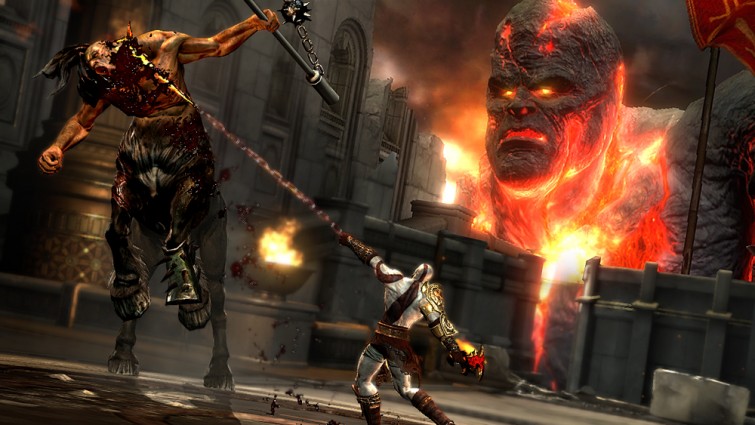 1317
By Doug Contreras
6 years ago
In Game Room

God of War is my favorite series of all time. When I played the first God of War on the PS2 back in 2005, it blew my mind. The violence, the mythology, the story– everything was awesome. From the very beginning of the game you are thrown into some hardcore ass-kicking.

One minute into the game and you already feel like Kratos. Surprisingly, even with my immense affection for the game, 2005 was the first and last time I played the first game in the series. Even with the release of it on the PS3, I never bothered to replay it. That all changed when I found out God of War 1 & 2 were being released on the Playstation Vita. I couldn’t wait to kick some mythological ass.

Let’s get something out of the way: I am a huge fan of gratuitous violence. Now, I’m not saying I condone real life violence, but in film and games I am all for it. I can’t remember where I saw the first clips of God of War, but I knew I wanted it.

I remember when I put the game in, my mom was doing something behind me. She couldn’t believe all the gore that was being shown on screen. She asked me if it was an appropriate game for a 16-year-old. Her comment didn’t even warrant a response. Couldn’t she see I was Kratos! I was grabbing enemies and ripping them in half, throwing them down to the floor and stabbing them with my blades. Chaining combos together to eliminate clusters of enemies. Every single decapitation felt so rewarding. The violence was off the charts. But I don’t think I would enjoy the game as much without the story and setting.

Greek mythology has always been a favorite subject of mine. The origin stories of the gods and their even crazier personalities have always interested me. Anytime I hear about a movie involving Greek mythology I have to watch it, even though most of the time they are total crap.

As I played through God of War, I was gitty with the mention of all the main gods. Not only did they all fit into the story, I felt even more engaged, because I actually knew what they were talking about. I thought to myself, “ so not only do I get to be a badass… but I get to take down Ares the greek god of war?” Along the way I  meet Zeus, Poseidon, Hades, my “guide” Athena and tons more Greek characters. This game hit all the buttons for me.

All those feelings came rushing back to me, when I started God of War on the PS Vita. It had been nine years since I played the game but it felt new again. Every single kill, puzzle and boss fight was like a new experience. I remembered bits and pieces of certain parts of the game, but for the most part I was playing it for the first time again.

The Vita version isn’t without it’s problems. The game has tons of bugs. You jump in a certain location and you get stuck against an invisible wall. The hit detection is off at times. Its easy to get swarmed by enemies in a spot where the camera shifts views. The camera and your walking directions are tied together. I can’t tell you the amount of times I’ve walked through a hallway, the camera shifts, and I end up going back through the hallway again, because I’m still holding the directional button forward.

The biggest issue I had was with the Vita’s back touch pad. It’s used for opening chests, gates, and most importantly, saving. Sometimes when I would go to the Vita home screen then jump back into the game, the touch pad wouldn’t respond anymore.  I would have to shut the entire system down and boot it up again.

Dealbreaker? Definitely not. Annoying? Hell yeah. Did I love every single second of the eight plus hours I put into it? You’re damn right I did. The God of War collection for the Playstation Vita is a must have for anyone who loves hack n’ slash games or is a mythology/violence nerd like myself. Even if you already own the game on the PS2 or PS3, it doesn’t hurt to have this game in your pocket.