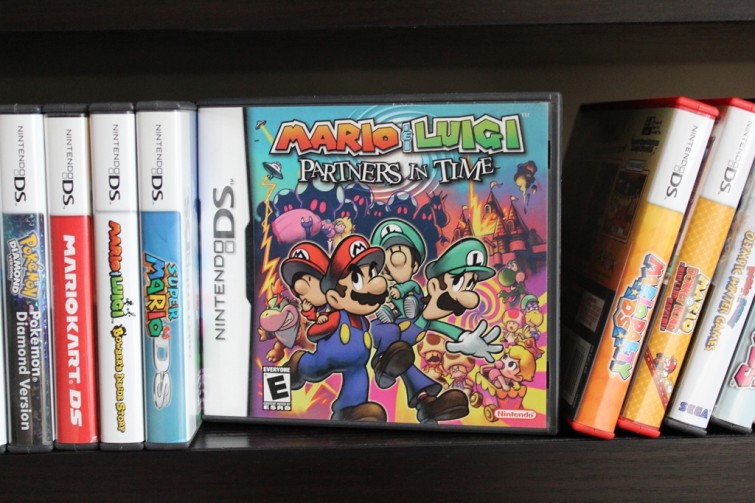 Mario & Luigi: Partners in Time is one of the more ambitious handheld titles in the series, allowing players to control four Mario characters at once to battle enemies and solve puzzles. And it lives up to that ambition in some instances.

Super Mario RPG blended a lot of new and old RPG elements effectively into the Mushroom Kingdom universe, and the first two spiritual successors, Paper Mario (Nintendo 64) and Mario & Luigi: Super Star Saga (Game Boy Advance) improved on the formula by adding unique and charming characters and game mechanics. So it felt safe to assume that Mario & Luigi: Partners in Time, released in 2005 would not disappoint.

That mostly held true, but the game does have several flaw that prevented it from being the engaging classic that it could have been.

Each level is structured with a very linear path. Partners in Time leaves little room for exploration– something that made previous Mario RPGs implemented successfully. As the player progresses, each level is sewn together with essentially the same kind of layout. It makes the game feel less like an RPG and more like a platformer with puzzles and a few RPG elements thrown in.

As the title suggests, time travel plays a major role in the plot. Essentially, Mushroom Kingdom of the past has been invaded by aliens and Mario and Luigi must team up with Baby Mario and Baby Luigi, with the help of Professor E. Gadd’s time machine, to save it. Players sometimes control all four characters at once in battle and to advance through over-world levels and puzzles, which is executed fluently here.

Partners in Time’s levels are designed full of color and imagination. This title is set in Mushroom Kingdom and features a lot of great nostalgic music and sound effects that players will remember from previous Mario entries like Super Mario 64. One component that made the first entry in the Mario & Luigi series so great was the brand new setting that provided more bizarre surprises and humor. So this return to Mushroom Kingdom will be fun for some and uninteresting for others.

As the first duel-screen installment in the Mario and Luigi series, Partners in Time made great use of the touch screen. At any point in the game, both screens are being utilized effectively. Many of the puzzles are creative, but anyone past their early teens will find them repetitive and easy. The puzzles (and the game in general) holds your hand for most of the game and guides you through it without, taking away any sense of accomplishment.

Most of the enemy characters are bland and unimaginative, despite being animated well. Super Mario RPG created tons of new characters that were completely new to the Mario series and that contributed to the game feeling fresh and memorable. By the end of the game, few enemies in Partners in Time really stand out except the game’s primary villain.

Partners in Time is a mildly entertaining entry to the series that die-hard Mario fans will find enjoyable. But most other gamers expecting Partners in Time to live up to Super Mario RPG, Paper Mario or Mario & Luigi: Superstar Saga will be disappointed.